When a few European Muslims committed atrocities in Brussels, at least one American politician started talking about targeting (completely unrelated) American Muslims to show how serious he was about fighting terror.

While Republican front-runner Donald Trump was returning to his familiar refrain of “bomb and torture,” fellow conservative presidential hopeful Ted Cruz wasn’t content with fantasizing about killing ISIS (or any civilians in the general region). Sure, he invoked carpet bombing, again, but he also set his sights on violating the civil liberties and religious freedoms of Americans who pray to the wrong God. 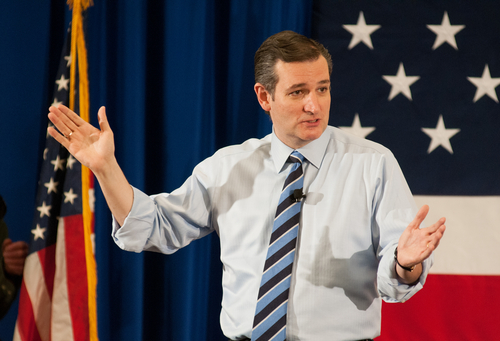 One of his goals?

We need to empower law enforcement to patrol and secure Muslim neighborhoods before they become radicalized.

Because, obviously, if you pray to the same god as a terrorist, you’re guilty. Of something. Let’s just keep an eye on you. In your neighborhoods. Wherever they are. (#WeLoveSmallGovernment)

But when that terrorist is Christian, and his God is your God, the similarities seem to end. Ted Cruz doesn’t share a faith, much less extreme political beliefs, with those people. In fact, it’s time for a few rounds of the blame game because Christian terrorists are surely the fault of somebody — anybody — else.

That, after all, was Cruz’s reaction when he was asked about Robert Lewis Dear, who attacked a Planned Parenthood clinic and killed multiple people last November.

It’s also been reported that he was registered as an independent and a woman and transgendered leftist activist, if that’s what he is. I don’t think it’s fair to blame on the rhetoric on the left. This is a murderer.

Dear wasn’t any of those things. He informed police that there would be “no more baby parts” — referencing the debunked Planned Parenthood videos that many conservatives, including Cruz, have repeatedly supported — and later called himself a “warrior for the babies.”

What did Cruz do then? Nothing. Even though his own party’s false rhetoric bore some of the blame.

It seems policing radical Christians and “securing” the neighborhoods and communities that push hateful, extremist ideology is out of the question. Do you believe that women’s healthcare providers are murderers? Do you think women who exercise their reproductive rights are baby killers? Don’t worry. Cruz isn’t coming after you.

Despite the fact that such vitriol certainly fuels Dear-like attacks, the Ted Cruzes of the world are quick to shrug off any and all responsibility. They would never advocate something as outrageous as infringing on the civil liberties and religious freedoms of entire communities that pray to the same Christian God.

This hypocrisy is breathtaking, particularly in the case of people like Cruz who scream “religious freedom!” whenever the law is applied equally to Christians. More importantly, though, the responses offered by people like Cruz following acts of Christian terrorism make it clear that they don’t really believe such tactics would work.

After all, if there was really some benefit to targeting American religious communities whose members share a God with terrorists overseas, you’d think we’d see it when applied to Christians as well as Muslims.

The efficacy of this proposal seems to be of little concern. Fearmongering against the “other,” from “welfare queens” to “secularists,” is good conservative politics; and Muslims are a particularly favorite target for the Right. Might as well exploit the carefully inculcated anti-Muslim biases that Republicans have been strengthening for years.

It’s intellectual and political cowardice, offering up a group to blame instead of actual solutions, masquerading as a show of strength.

March 24, 2016 School Board Member Apologizes for Saying Atheists Can "Crawl Back Into Their Hellhole"
Browse Our Archives
What Are Your Thoughts?leave a comment