Due to Bible Distribution, a Colorado Elementary School Will Now Give Away Satanic Coloring Books March 24, 2016 Hemant Mehta

Due to Bible Distribution, a Colorado Elementary School Will Now Give Away Satanic Coloring Books

Everyone say hello to The Satanic Temple coloring books which will soon be available for students at Delta Middle School in Colorado — all thanks to Christians who demanded Bibles be given away and the administrators who allowed it to happen:

Here’s the backstory: In December, we heard about the legal violations taking place at this school. In particular, students in a social studies class were taken to the library to do some work; when they arrived, their teacher told them there were bibles on a table in the main doorway, and they could pick one up as they left.

According to the District’s own policy, though, non-curricular material could not “be distributed in any classroom of any building then being occupied by a regularly-scheduled class.” Which is exactly what was going on inside of the library.

The policy says materials can only be given out “one-half hour before school and/or during regularly scheduled lunch periods and/or 15 minutes after the close of school.” This giveaway took place during the school day and not during a lunch period.

The teacher also allegedly said to kids, “There’s bibles and they are free if you want one.” You can debate whether or not that’s a form of coercion. You can also debate whether a book that says Jews and Muslims and atheists are going to hell constitutes literature that “attacks” non-Christian groups.

When one student didn’t — she’s the one who told her mother about this, which is why we know about it at all — look what happened:

Anne Landman, who first posted about this problem on her website, pointed out that District officials refused to admit any wrongdoing:

The concerned parent eventually took the matter up with the Freedom From Religion Foundation.

FFRF sent multiple requests asking the District to end the distributions… to no avail. The District said they did nothing wrong and the Bible giveaways would continue.

And that’s when the Satanists stepped in with their own request. FFRF requested that the Satanic coloring book, along with nearly a dozen additional pro-atheism pamphlets, be given away to students in a similar way: 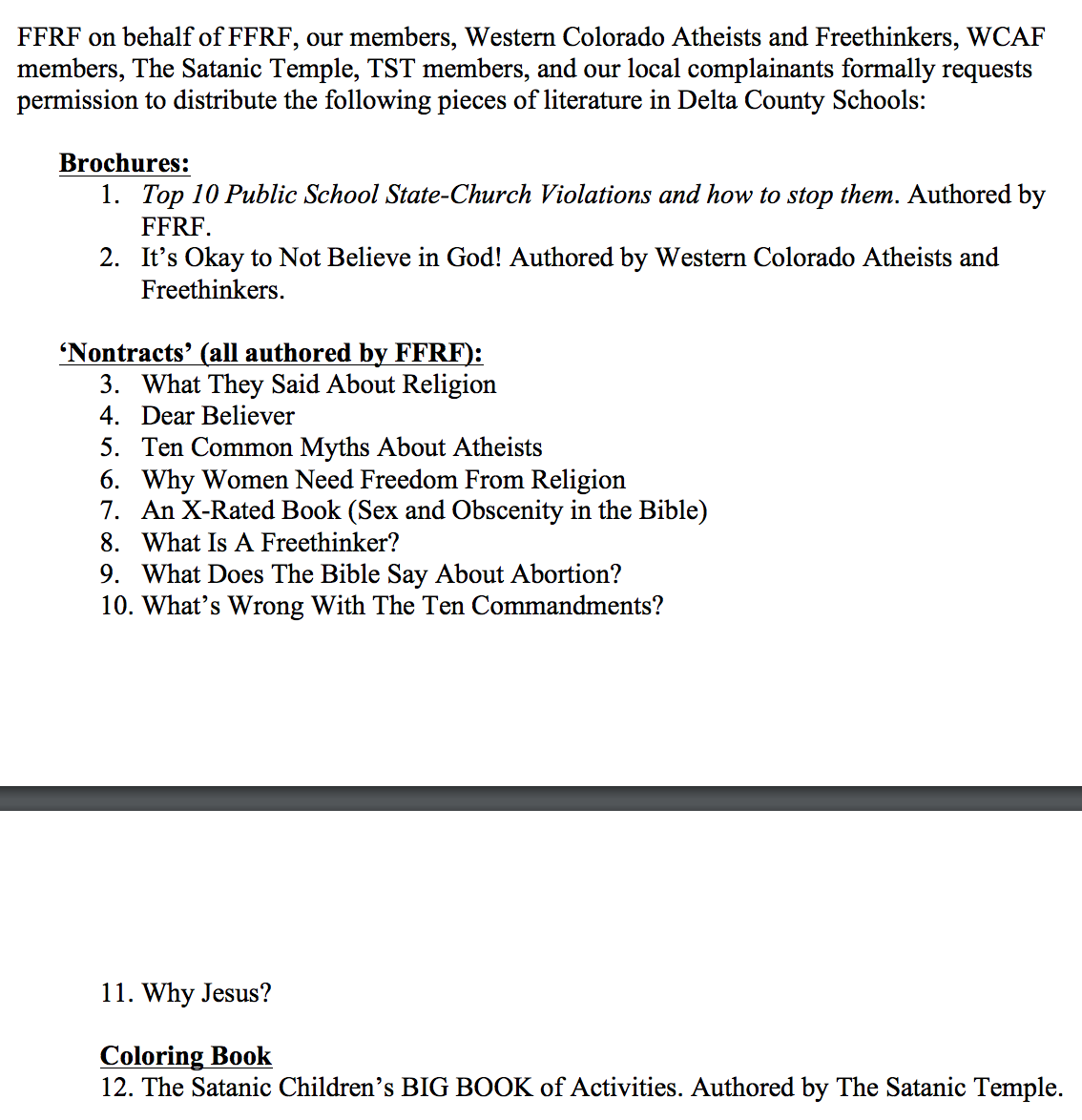 “The School District is not required to maintain this open forum and is free to close it rather than allow FFRF to distribute materials,” FFRF Staff Attorney Andrew Seidel wrote in a March 3 letter to the district. “We do not think schools should be a battleground for religious ideas. But when schools allow the Gideons to prey on children, their message of eternal damnation for any who don’t believe in their God must be countered.”

Remember: Orange County (Florida) schools tried to block atheists from giving away literature like this… and failed. It ultimately cost taxpayers approximately $90,000 in legal fees.

As long as Delta County officials said yes to the Bible, they legally had to say yes to the Satanic coloring book and pamphlets like “It’s Okay to Not Believe in God!”

It’s worth noting that FFRF would rather see the open forum closed completely that having their literature handed out.

But District officials said yes to the Satanist and atheist material, and parents in the District are furious:

Some Delta parents are in an uproar that atheist and satanic literature will be distributed in Delta County high schools and middle schools on April 1st.

Kurt Clay, with the Delta School District says if they are going to make literature for things such as Boy Scouts, 4H or other organizations available, they have to allow all types of information to be available to students.

“This is the other side of that,” explained Kurt Clay, the Assistant Superintendent. “The policy says we cannot discriminate what is handed out, we just have to follow the process.”

The process means that atheist literature will not be handed out to students, but rather placed on a table in a school’s library. This will allow students to pick it up the materials only if they wish to.

So… thanks, Jesus! Because Christians insist on converting children, Satanists and atheists will get a crack at it, too. (And our side’s material is much more appealing to kids.)

Spokesperson for The Satanic Temple, Lucien Greaves, said of the distribution in a press release:

“I think it’s lovely that Delta County Public Schools is helping us to help provide students with a such a poignant lesson in First Amendment Constitutional Law and the principle of pluralism, not to mention Comparative Religion,” Greaves states. “Those lessons couldn’t possibly be any more relevant today.”

The distribution will take place on April 1.

District officials say they’ll work to revise the policy in the future.

March 24, 2016
School Board Member Apologizes for Saying Atheists Can "Crawl Back Into Their Hellhole"
Next Post