Here’s a simple truth: It doesn’t matter how great of a high school basketball coach you are; If you break the law, you’ll still be punished.

Richard Martinez is the Head Coach of the Espanola Valley High School (New Mexico) boys’ basketball team. They’re fresh off a State Championship, which is a big deal, but Martinez just got punished. He’s on a paid leave of absence from the school because he was leading the team in prayer. 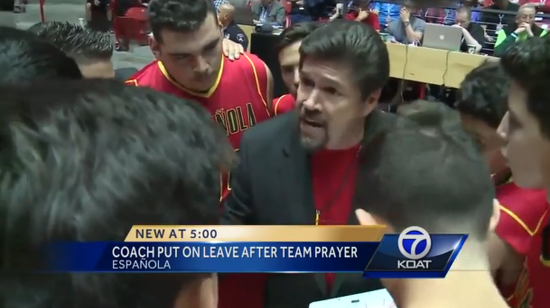 The District took an unusually aggressive stance. It seems like a punishment usually reserved for a second or third “strike.” And if that’s the case, good for the Superintendent for taking this problem seriously. He’s there to coach, not to preach.

But as you can imagine, people in the community are furious, acting like proselytizing is a welcome coaching method. Between comments made on local news and on Facebook, it’s clear people don’t understand what the problem is. They don’t understand the Establishment Clause and they assume this was voluntary (unaware that the coach’s participation in any way adds a great deal of coercion to the practice).

The administrators aren’t helping their case, either, by refusing to talk about it because it’s a personnel matter.

But if Martinez was praying with the team and refusing to stop, then this is the appropriate punishment. He can change his ways or find a private Christian school to coach at. As long as he’s at a public school, though, he doesn’t get to preach Christianity.

(Screenshot via KOAT. Thanks to Brian for the link)

March 23, 2016
Glenn Beck: God Intends for Mormons to Save the Constitution by Electing Ted Cruz
Next Post