If you care about experiments, evidence, data, and facts, then you have to be appalled by what’s been going on in Kansas over the past few years. Imagine Republican Governor Sam Brownback with a rubber stamp from his Republican House and Senate being able to do practically anything he wants. He eliminated income taxes on small businesses, gave huge tax breaks to the rich, cut money from the education budget, laid off thousands of government employees, heightened welfare requirements, and more.

Long story short, Kansas is now a hellhole thanks to his conservative policies — the same ones that the Republican presidential candidates now want to institute for the nation.

Seth Meyers explained the problem the other night: 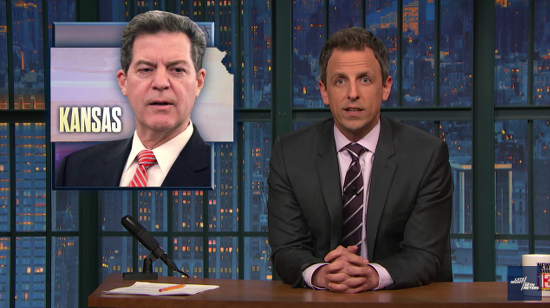 The grand experiment failed. So why would we want to replicate it on a larger scale? It makes no sense at all.

Must be the kind of science you learn at the Creation Museum.

March 22, 2016
In County Motto, New Jersey Town Boasts of Being a Great Place to Pray
Next Post