Following the atrocities in Brussels, conservatives were predictably eager to indulge their baser anti-Muslim instincts. Republican presidential front-runner Donald Trump was quick to return to his bomb-and-torture routine while next-in-line Ted Cruz elaborated on the “need to empower law enforcement to patrol and secure Muslim neighborhoods before they become radicalized.”

It occurred to at least one Republican, though, that maybe refugees fleeing ISIS might have some legitimate concerns after all. 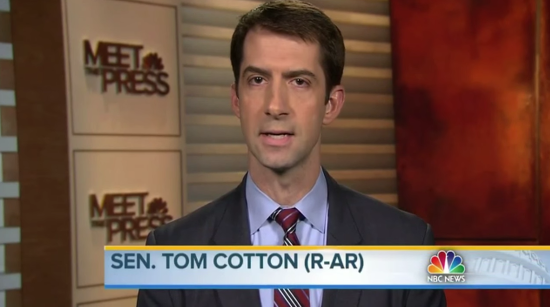 Don’t fall out of your seat just yet, though, because there are some pretty strong strings attached. The only refugees who Arkansas Senator Tom Cotton had in mind were the Christian ones.

In a radio interview with Kevin Miller, he occasionally mentioned other impacted religious minorities, but his focus was pretty clearly on Christians. Cotton is so concerned, in fact, he wants to create a special visa program to prioritize Christian refugees over all others.

When Miller asked him to explain the purpose of the “Religious Persecution Relief Act” Cotton has introduced, he responded

Well just last week, Secretary John Kerry announced what was plain for everyone to see. That the Islamic state was engaged in a genocide against Christians and other minorities. Christian communities have existed almost literally since the time of Jesus himself, have been targeted for persecution and extermination, so I think that the United States has a moral imperative to try to save these Christians and the other small minority groups. So I would create a special kind of visa program that wouldn’t take any access away from anyone else in the United States, but would recognize that Christians — like Jews in the Soviet Union — are being singled out for persecution and elimination. And when that’s in our interest, as it is in combating the Islamic State, I think we should do everything we can to try to save religious minorities when they’re facing that kind of discrimination, persecution and eradication.

The emphasis on how saving Christian refugees is in our best interests in combating ISIS is interesting. Is it not also in our interests to help fleeing Muslims? Or does sparing moderate Muslims from ISIS’ vengeance somehow hurt our efforts against the Islamic State?

Ultimately, I guess Cotton is concerned about the lives of ISIS’ innocent victims… but only if they pray to the right God. Or at least don’t pray to the wrong one.

March 23, 2016
Richard Dawkins Will Not Be Able to Attend the Reason Rally Due to Health Concerns
Next Post