Glenn Beck: God Intends for Mormons to Save the Constitution by Electing Ted Cruz

Lately, Glenn Beck has become the “Aliens!” guy of politics. But instead of bringing everything back around to extra-terrestrial creatures, it’s more like some bizarre combination of God and Ted Cruz. 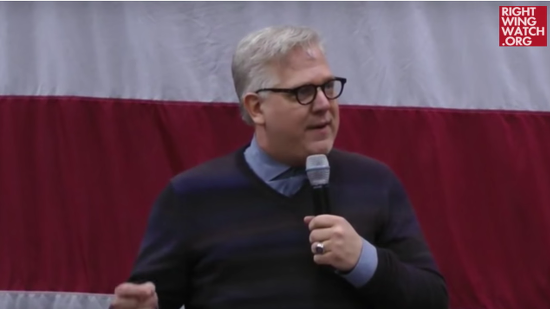 Why would you go to hell if you voted for Donald Trump or Hillary Clinton? Because God wants Ted Cruz to be president.

Why did Justice Antonin Scalia die? Because God wants Ted Cruz to be president.

Why do people listen to Glenn Beck? Because God wants Ted Cruz to be president.

And the other day, he solved another mystery for mankind.

Why did Joseph Smith (allegedly) predict a moment in American politics when Mormons would save the Constitution? Because — wait for it — God wants Ted Cruz to be president.

And this great weight falls on the shoulders of the Mormons of Utah, apparently, who are charged by the Prophet Beck himself with doing what the evangelicals have failed to do (no doubt, led astray by the false prophets and traitors from Trump’s camp).

The event in question is referred to as the “White Horse Prophecy,” and it’s not official Church doctrine. Right Wing Watch’s Kyle Mantyla explains:

This is how Brigham Young reportedly explained it in 1854:

Will the Constitution be destroyed? No; it will be held inviolate by this people; and, as Joseph Smith said, “The time will come when the destiny of the nation will hang upon a single thread. At that critical juncture, this people will step forth and save it from the threatened destruction.”

In 2010, the LDS church issued an official statement that “the so-called ‘White Horse Prophecy’ is based on accounts that have not been substantiated by historical research and is not embraced as Church doctrine,” but that didn’t stop Glenn Beck from repeatedly invoking it as he campaigned for Ted Cruz and Sen. Mike Lee in Utah over the weekend.

Somehow this prophecy is too ludicrous even by LDS standards. While, as a skeptic, I can’t say I’m particularly impressed with prophecy in general, it must be pretty spotty when your faith doesn’t recognize it as legit. Then again, this is a guy pleading with voters to support Ted Cruz, so low standards are kind of a given.

At any rate, Beck’s not particularly impressed with the evangelicals who have been hoodwinked by the Orange Menace. They’re not listening to their God. But Mormons have an opportunity to do better. They can listen to God and vote for Ted Cruz. Because, again, these days, that’s what it’s all about for Beck.

While speaking at another Cruz rally in Salt Lake City, Beck said that it was up to the Mormons to save this nation because “the evangelicals are not listening to their God.”

“Let me testify to you now,” he stated. “The Book of Mormon is a book that was given to us for this time in this land and it explains exactly what it’s going to look like when trouble comes … You know what time it is, the Priesthood is supposed to rise up and restore the Constitution. Now is that time!”

“Utah has an incredible opportunity,” he continued. “So many Christians have been standing up, but all throughout the South, the evangelicals are not listening to their God. Let us raise a standard in Utah. Let us do this one thing perfectly right.“

The Constitution is in trouble, Mormons. But don’t worry: God’s got you covered. He left you a second-hand prediction in the 1850s about how Mormons would elect a Southern Baptist a hundred and fifty years later and save the Constitution.

If Beck’s wrong, at least it’ll make a good plot for Nicolas Cage’s next movie.

March 23, 2016 State-Winning High School Basketball Coach Put on Leave After Praying with Team
Browse Our Archives
What Are Your Thoughts?leave a comment