Yesterday, Utah’s Governor Gary R. Herbert signed into law H.B. 127, making license plates with the phrase “In God We Trust” a standard option, not subject to the $5 surcharge like other specialty plates. 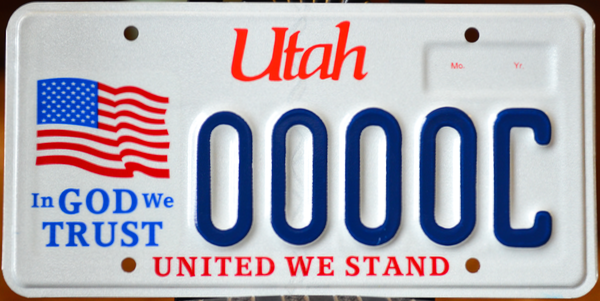 The Governor wrote on his blog:

“John Adams said our Constitution was made for only a religious and moral people.” Gov. Herbert said. “Our nation’s motto bears extra importance at a time when free worship of God and religious rights are being challenged.”

With 10,736 plates sold as of December 2015, the “In God We Trust” license plate is the state’s most popular commemorative plate. Effective Jan. 1, 2017, it will become one of three standard Utah plates, along with The Greatest Snow on Earth and Delicate Arch.

Bullshit. Tell me where free worship of God is being challenged in the U.S. Tell me where Christians have it rougher than people of other faiths and no faith. If anything, Herbert is longing for the ability for certain Christians to discriminate against LGBT people and others whom they feel they’re above. He says he wants to promote the motto, but it’s clear in his own statement this is really about religion.

It’s incredible how Herbert can whine about Christian persecution while at the same time signing a bill elevating Christian beliefs.

March 22, 2016 Ted Cruz Defends Choice of Anti-Muslim Conspiracy Theorist as a Foreign Policy Advisor
Browse Our Archives
What Are Your Thoughts?leave a comment