Presumably taking a break from selling giant buckets o’ food, televangelist Jim Bakker explained his latest conspiracy theory last week. He said there’s a movement in the public schools to turn students against the country, and that’s why so many young people support Bernie Sanders.

Which makes Sanders (a Jewish man) just like Hitler. 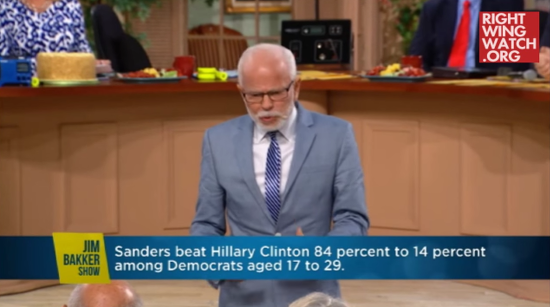 “One of the most popular politicians right now is a socialist,” Bakker said. “And who is his biggest following? The young people of America, from the colleges. Maybe you understand a little bit what it felt like to live when Hitler was reigning and the church had to sit by and keep watching it and watching until millions, tens of millions — they had to build factories to kill people. All it takes is a couple bombs and all of America will be dead within a year, less than a year, just months.”

I’m amazed at how wanting to give people free health care because he believes it’s a human right somehow makes Sanders the equivalent of a terrorist who wants everyone dead.

Maybe that makes sense only after you’ve eaten 50 days of shitty food from a bucket.

March 22, 2016
Conservative Matt Walsh Compiles List of “Traitors” to the Cause (Because God Wants Him To)
Next Post

March 22, 2016 Homophobia Exists Even Among Brilliant Scientists
Browse Our Archives
What Are Your Thoughts?leave a comment