Last week, we examined some of the people Ted Cruz was leaning on for foreign policy advice, and a common theme among many of them was their intense animosity toward Muslims. Among those luminaries was Frank Gaffney, head of the Center for Security Policy — a group that, like Gaffney, largely focuses on spinning outlandish anti-Muslim conspiracy theories. 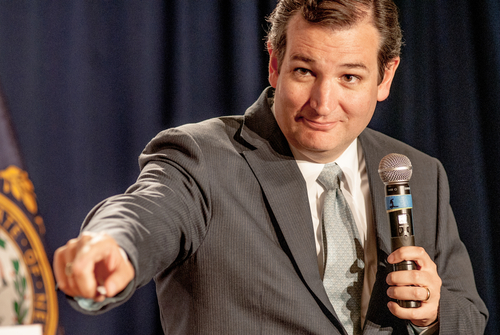 So why would Cruz listen to the foreign policy advice of someone who believes our government is full of Muslim Brotherhood agents and President Obama is a secret Muslim (or capitulating to Muslims)? CNN’s Wolf Blitzer wondered the same thing. This is how Cruz responded:

“Frank Gaffney is a serious thinker who has been focused on fighting jidahists, fighting jihadism across the globe,” Cruz said of the Center for Security Policy founder.

And when pressed on specific, bizarre remarks, Cruz channeled his inner Palin:

“I’m not interested in playing the media ‘gotcha game’ of ‘here’s every quote everyone who’s supporting you has ever said at any point, do you agree with every statement?'” Cruz said on Monday. “That’s silliness.”

When someone’s entire world is comprised of a giant Muslim or pro-Muslim conspiracy, reaching from the NRA to the Supreme Court to the presidency, that’s not a “gotcha” question. Particularly when you’re voluntarily seeking foreign policy advice from that person and expecting the nation to support your judgment in doing so.

On the other hand, while Cruz of late seems amazed at the ascendancy of his rival and GOP front runner Donald Trump, he shouldn’t be. His response demonstrates quite well what’s enabled that meteoric rise — a world where pointing out the facts are considered “gotchas” and it’s considered “silliness” to question the judgment of someone who sees a Muslim conspiracy everywhere he looks. That denial of reality is crucial to the success of the Cruzes of the world. At the same time, it’s the very thing that enabled Trump, who, for what it’s worth, has also relied on Gaffney’s work to bolster his Muslim ban proposal.

After all, when stating facts counts as some sort of media bias, why shouldn’t “I’ve got smart people” replace actual policy?