Ted Cruz and Donald Trump Have a Disastrous Plan to Repeat History After the Brussels Attacks March 22, 2016 Lauren Nelson

As ISIS takes credit for today’s attacks in Belgium, American political figures have rushed to offer their thoughts to the public. Statements from Hillary Clinton and Bernie Sanders were pretty standard sounding, and John Kasich‘s was thoughtful as well. Donald Trump and Ted Cruz? Not so much. 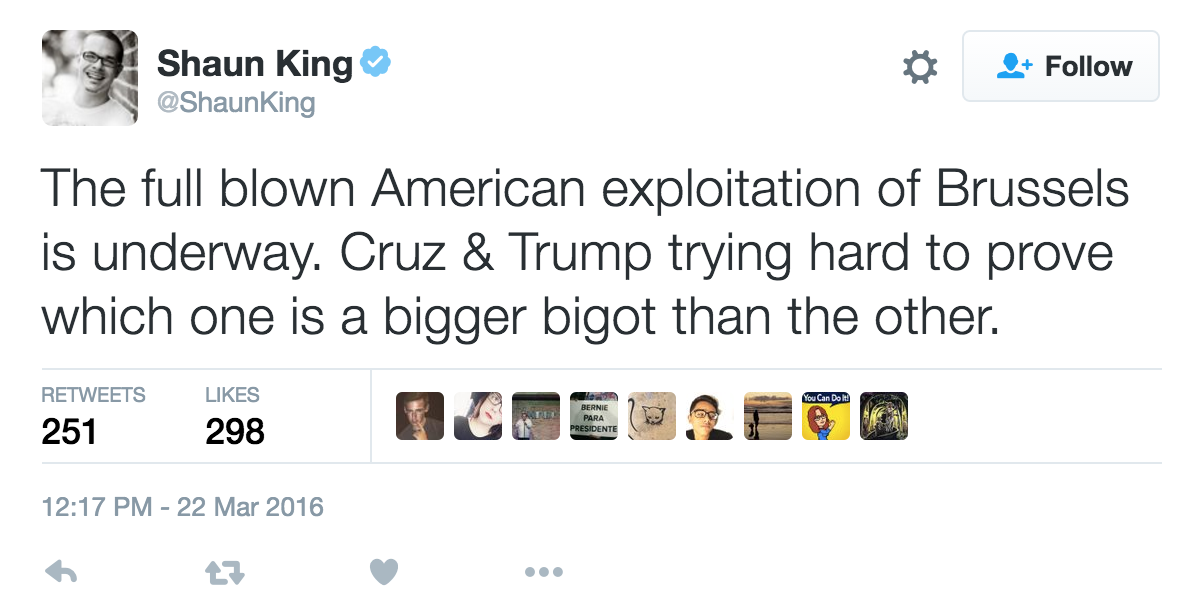 It was just yesterday that Trump called for disengagement with NATO, whose headquarters are located in Brussels. All that changed as he moved to capitalize on the tragedy on the morning news circuit. Calling Brussels a “disaster city” and “horror show,” he blamed the attacks on lack of assimilation by immigrants while calling for suspects to be subjected to waterboarding. Trump sneered at “liberal” refugee policies and any indication that Western powers might have contributed to unrest in the nations people are fleeing. He once more called for a ban on Muslim immigration to the United States. He argued that we “must” have domestic surveillance of all Muslims, with particular focus on mosques.

Ted Cruz was riding a similar wave. In a hastily organized presser this morning, he called the attacks an act of war. He bemoaned “political correctness,” warning President Obama that the American people don’t need “another lecture on Islamophobia.” That was a common theme in his answers, as he demanded increased immigration scrutiny and liberal use of the term “radical Islamic terrorism.” And then he took it even further, saying, “We need to empower law enforcement to patrol and secure Muslim neighborhoods before they become radicalized.”

This kind of rhetoric is nothing new for Trump and Cruz, and it’s just as absurd now as it was when they started spewing it. Let’s be real for a minute: Islam is the world’s second largest and fastest growing religion, with more than 1.6 billion practitioners across the globe — 1.8 million of them stateside. The vast majority of those believers do not believe in political violence, and they condemn ISIS outright. There are certainly elements of the religion worthy of criticism, but the same could be said of Christianity. Imagine the government doing to American Christians what the Right wants to do to American Muslims and the claims of persecution might actually be on solid footing.

These inconvenient facts are of little consequence to the Republican electorate, unfortunately. Our country’s power is almost within reach of two men who are ready and willing to actually persecute a massive chunk of the global population, starting right here at home. And while they beat their chests and argue over who’s going to be more bloodthirsty in their military attempts to quash terrorism, they’re doing a damn fine job of encouraging it.

Though extremists couch their battle cries in the trappings of religion, their recruitment is fueled by convincing would be recruits to hate the West because the West hates them. When would-be presidents validate those messages by championing overtly prejudicial policies targeting them and disparaging them as evil villains, terrorist recruitment power grows. Trump knows this well. He’s already been used in terrorist recruiting materials, and the man isn’t even the Republican nominee yet.

And we’re not just talking about militant groups overseas. This sort of behavior could increase the number of people who self-radicalize stateside. After being targeted by prejudicial policy and posturing and the relentless harassment that follows this sort of political trend, it’s entirely possible that some people might identify with the broad messages used by ISIS, and without coordination with members, execute an attack of their own. In other words, proposals like the ones pushed forward by Cruz could be responsible for the radicalization they purport to prevent.

But it’s not just that calls for initiatives like surveillance could grow the number of ISIS supporters. It’s important to note that self-radicalized terrorists are often not recruited or formally trained, which means there’s no clear connection between them and known terrorist organizations. They might not have a Facebook page littered with propaganda. They might not discuss their rage with friends. That makes it very hard to find them using conventional techniques. Like surveillance.

After Sayed Rizwan Farook went on an ISIS-inspired killing spree in California, Seth Jones, director for international security and defense policy at the RAND Corporation, explained the challenge to NPR, saying:

Look, I think San Bernardino represents a threat that we’ve seen developed in the U.S. over the last year or two in particular, individuals radicalizing, particularly from the Islamic State, used to be al-Qaida in the past. But the numbers are increasing. We have FBI open investigations now in every state in the U.S. And that gives us, I think, a sense of the nature and the degree of threat.

With individuals who don’t come up on the radar screen because they’re talking to individuals in Syria, Iraq or Pakistan, where they traveled overseas or they’re active in promoting violence online, really this leaves better engagement with local communities by federal, state and local entities — not just law enforcement but others. This really pushes the focus of this discussion down to communities in the United States.

When Jones talks about community engagement, another problem with the Trump/Cruz school of policy thought comes to light. We need support and trust from members of Muslim communities, right? But those same policies that cause self-radicalization also give non-radical Muslims ample reason not to trust us. In other words, the proposals coming from the Right make an existing problem bigger while kneecapping our ability to tackle it. Bravo, folks.

How do we know this is the likely outcome of these suggested policies and ugly speeches? Because it’s already happened. Muslim surveillance and profiling has been a feature of the fight against terrorism 9/11, and thanks to people like Dick Cheney, we also engaged in some heinous torture practices. It didn’t result in the elimination of al-Qaeda or the stabilization of Iraq and Afghanistan, though we said it would. It did, however, lead to a great deal of hate crimes against those perceived as Muslim. It resulted in homegrown terrorists like Farook and Dzhokhar Tsarnaev.  It gave rise to ISIS in all its hellish glory. It made everything worse.

We’ve done this before, and it does not turn out well. What happened in Brussels was heinous, but repeating history is not the answer. If anything, it makes another Brussels attack a near certainty.