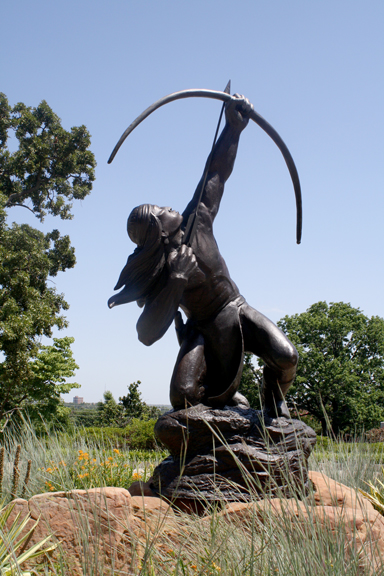 It represents a young Apache warrior who, as the legend goes, was chosen to shoot an arrow into the clouds during a drought in order to bring rain to his village.

In 2009, the state began issuing license plates featuring an image of the sculpture: 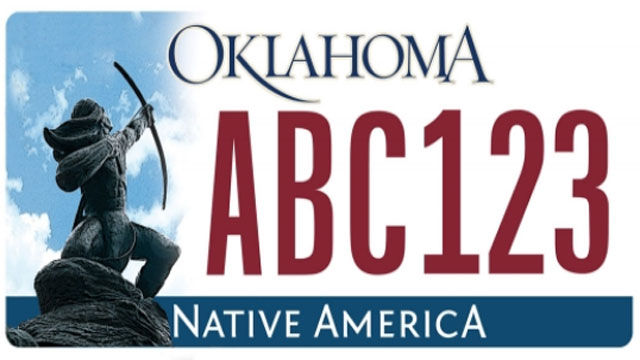 It raised an interesting question: Was this merely a representation of Oklahoma’s Native American history (in which case it’s fine) or was it an illegal endorsement of a non-traditional religion?

Because it was the new default plate, you had to pay an additional fee if you wanted a different image. (If you covered it up, you could face a penalty.)

Keith Cressman, a Christian pastor, paid for a new plate for a while before eventually deciding he shouldn’t have to. Why should the default option promote a religion that wasn’t his?

He didn’t get the irony that having a Native American myth on his license plate was pretty similar to atheists having a cross or “In God We Trust” written on theirs.

Mr. Cressman alleged violations of his rights to freedom of speech, due process, and the free exercise of religion under the First and Fourteenth Amendments to the United States Constitution… Alternatively, he sought to compel the Defendants to provide him with specialty license plates at no additional cost.

The district judge threw out his lawsuit in May of 2013. But that June, the 10th U.S. Circuit Court of Appeals in Denver reversed that ruling, saying that Cressman had a point:

In sum, Mr. Cressman has plausibly alleged that the image on the standard Oklahoma license plate conveys a particularized message that others would likely understand and therefore constitutes symbolic speech that qualifies for First Amendment protection. In addition, he has plausibly alleged that he is compelled to speak because the image conveys a religious/ideological message, covering up the image poses a threat of prosecution, and his only alternative to displaying the image is to pay additional fees for specialty license plates that do not contain the image.

Because of the reversal, the justices sent the case back to lower courts for reconsideration… and that’s when things changed considerably.

This time, a judge found that there was nothing to complain about. A reasonable observer would have no idea what the hell he was looking at. Forget religion; this was just a Native American shooting an arrow:

A reasonable observer, even one living in Oklahoma, would not be likely to know of All[a]n Houser’s intentions or thoughts in creating the “Sacred Rain Arrow” statue or of the legend behind it, even if the observer assumed the image was an exact replica of the statue.

By that logic, this plate was just fine.

… in light of the relevant facts and history of the license plate redesign process, those viewing the image would likely connect the image to Oklahoma’s Native American history and culture. Yet, Mr. Cressman has repeatedly stated, both before this court and the district court, that he does not object to this message. His lack of objection to the only message that a reasonable observer would discern from the image is fatal to his compelled-speech claim; he has not been compelled to express a view he otherwise would not.

Cressman didn’t give up. He asked the U.S. Supreme Court to reconsider the case. This week, the eight justices decided they didn’t want to deal with this case, letting the Appeals Court’s ruling stand.

As I said, this case is unique in that we’re talking about a religious belief not even known by most Oklahomans. If state officials had approved a common religious symbol (like a Christian Cross), they would have been in the wrong. But because they chose a symbol that very few people understand, the courts have ruled it’s legal.

There’s the secret to getting the government to promote your religion: Make sure no one has any idea what you’re talking about.

(Tom image via Wikipedia. Thanks to David for the link! Large portions of this article were posted earlier)

March 22, 2016
School Board Member: Atheists Can "Crawl Back Into Their Hellhole" If They Oppose "Christmas Break"
Next Post

March 22, 2016 Don't #PrayForBrussels. Here's What You Can Do Instead
Browse Our Archives
What Are Your Thoughts?leave a comment