Full Frontal Features American Atheists at CPAC: “In Any Movement, You Need People Who Are Dicks” March 22, 2016 Hemant Mehta

Full Frontal Features American Atheists at CPAC: “In Any Movement, You Need People Who Are Dicks”

On last night’s Full Frontal with Samantha Bee, a segment done in the style of a Werner Herzog “German” film was devoted to American Atheists and their time at CPAC (the conservative conference) earlier this month. That’s where David Silverman and Amanda Knief attempted to convince Republicans to stop ignoring and demonizing the non-religious.

While the atheists were the butts of a few jokes, I don’t think they’ll say they were misrepresented in the segment, which is really all you can ask for. The best part may have been how they openly admitted to being dicks. 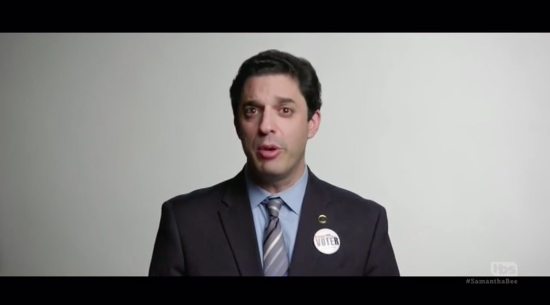 Silverman: Religion is a lie. And a scam. And a con. It has no redeeming values, and it has no place in today’s society.

Knief: Dave is what we call a firebrand…

Knief: In any movement, you need people who are dicks. Who are assholes.

Narrator: Yes, it’s difficult to have a movement without an asshole. And David and his team are here making a big, juicy, pungent movement in an unexpected place.

Congratulations, AA. You got to play the dick card, and the audience was still on your side. (Compare that to the times Freedom From Religion Foundation was featured on the Daily Show, only to be edited as the bad guys.)

Hell, the biggest laugh line of the whole piece appeared to be from the atheist who, after being told “I’ll pray for you,” responded with “Okay, I’ll think for you.”

While the narrator mentioned that the atheists were getting a cold reception from most of the crowd, he also noted that younger Republicans were far more open to their message and happy to see them there. It’s one reason to be optimistic about the future of the Republican Party, at least as it relates to being an arm of the Christian Right. With the percentage of non-religious Americans on the rise, the GOP will eventually have to start reaching out to us and making political concessions along the way. We’re a long way from that right now, but it’ll have to happen… unless Donald Trump just destroys the whole party.

Maybe the biggest criticism of the piece is that the producers tried making fun of everyone, so the segment lacked any coherent point of view. But that also meant American Atheists wasn’t the bogeyman. Silverman and Knief got to poke fun at themselves, rake in some fantastic publicity, and make a case for why politicians shouldn’t ignore them. It’s hard to argue with their presence at CPAC when it results in publicity like this.