Conservative Matt Walsh Compiles List of “Traitors” to the Cause (Because God Wants Him To) March 22, 2016 Rachel Ford

Conservative writer Matt Walsh hates Donald Trump. Not moderately (as if the King of Purple Prose could ever do anything moderately…), but deeply, with all the power and loathing he usually reserves for Planned Parenthood, feminists, gay people, transgender people, secularists, and… who am I kidding? He doesn’t reserve much of anything.

But he’s definitely not shying away from Trump. Not because Trump is the worst embodiment yet of conservative ideology in American politics, but because he’s not hardcore enough — and he’s not religious. 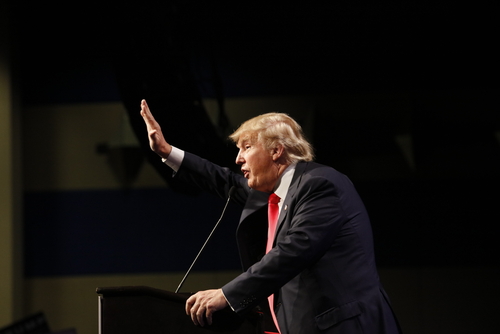 In a piece published on The Blaze, Walsh put together a list of Trump supporters who “betrayed” conservatism by getting on his side. And he’s got a Bible-thumpin’ good reason for moving these former-friends to the “enemies” column:

As unpleasant a task as it may be, I think we need to identify the traitors and remember their names. We do this not out of spite, but in keeping with the Bible’s many warnings about false prophets. Scripture urges us to “expose the unfruitful works of darkness” (Ephesians 5:11) and avoid becoming partners with those “who deceive with empty words” (Ephesians 5:6). Colossians implores us not to be “taken captive by deceit.” We’re warned in 2 Timothy that the time will come when people will not want to hear the truth, so they will surround themselves with frauds who tell them what their “itching ears want to hear.” I believe we have arrived at that moment, and it is now urgent that we specifically identify these frauds and false teachers. This is not a fun or polite process, but it is necessary, so we must get on with it.

If this is Walsh’s best attempt at being “anti-Trump,” it’s sounding an awfully lot like the vindictive behavior we’ve seen from the Orange Menace’s camp. But don’t worry. Walsh will forgive the traitors. Maybe. But they’ve got to beg first. And he’s not saying he’ll forget, either.

When the Trump phenomenon is over — whether that happens in the primary or the general, or after eight years of a totalitarian Trump rule — it’s crucial that we not allow these craven opportunists to pick right up where they left us. We may forgive them if they seek our forgiveness, but we cannot forget, and we cannot rely on their leadership again. These conservatives can be entrusted with the duties of leading the movement no more than a burglar can be entrusted with the duties of caring for your house when you’re away on vacation. It’s a matter of prudence, not revenge.

So who made the dishonor roll? Who does Walsh have in his sights for not-revenge? Quite a few people, actually. So many, in fact, it “is far too lengthy to list here in full.

Organizations didn’t get a free pass, either: Fox, Breitbart, and Drudge all ended up on the Walsh Treason Report, too.

There was a time when Walsh was “honored” by a mere mention from Coulter. These days, he’s wondering if “she was ever on [the rails] to begin with,” consigning her and the others to the ever-growing list of People and Things Matt Walsh Hates. (Grievous news, I’m sure, to those impacted.)

Even after listing the treasonous vagabonds, though, Judge Walsh has more to say. The man who vehemently insists that moderate abortion rights advocates couldn’t possibly be Christians since they support baby-killing (which was itself a form of Jesus-killing) is also upset by party purists. Specifically, he’s upset that they targeted people for harmless infractions but didn’t eviscerate Trump.

The capitulation that many conservative and Christian leaders have shown towards Trump goes well beyond what the liberal media shows towards Obama. I’ve never in my life seen anything like this, and I suspect I’d have to take a flight to North Korea to witness an equal level of unthinking deference. But at least Kim Jong Un’s subjects submit under the threat of death and imprisonment. Our “leaders” have subjugated themselves to the American Kim Jong Un simply for the publicity and the ratings and the chance to be friends with a billionaire celebrity.

Many people have endeavored to explain how Trump rose to these political heights and managed to grab a stranglehold on an ideology that supposedly abhors everything he represents, but I think the diagnosis of this national mental health crisis must start with these turncoats. They could have put a stop to Trump, but they didn’t even try. They didn’t even try.

Remember, these charlatans have mercilessly exiled many “moderate” Republicans into the wilderness for the mildest of heresies. They’ve hung the deadly “RINO” label around conservatives for the slightest offenses. They’ve conducted Salem-style witch trials to expose and execute any conservative accused of committing the most harmless misdemeanors against the cause.

It was bad enough when I realized I had common ground with Walsh over our mutual dislike of Trump. Now hell must have frozen over since Walsh, like me, is upset by an excess in vitriol. But maybe Lucifer doesn’t need those wool socks yet, because what Walsh is really upset about isn’t so much that the Rubios of the conservative world were attacked as “RINO”s but that Trump wasn’t. Now that’s more like the Walsh we all know and love loathe.

At any rate, at least he can take solace in the fact that he’s not just throwing a tantrum, complete with menacing undertones, because he doesn’t like the front-runner of his party. He’s doing it for God, because God deems it “necessary” to identify those traitors and false prophets who didn’t support a more religious, conservative candidate.

Knowing that God has his back may help ease the rage tears as he adds names to his little black book.

March 22, 2016
Ted Cruz and Donald Trump Have a Disastrous Plan to Repeat History After the Brussels Attacks
Next Post