This week, British Prime Minister David Cameron appointed MP Stephen Crabb (below) to the position of Work and Pensions Secretary in Wales. And in the midst of his already controversial appointment, another scandal has come to light: Crabb’s ties to an organization that promotes anti-LGBT “conversion therapy.” 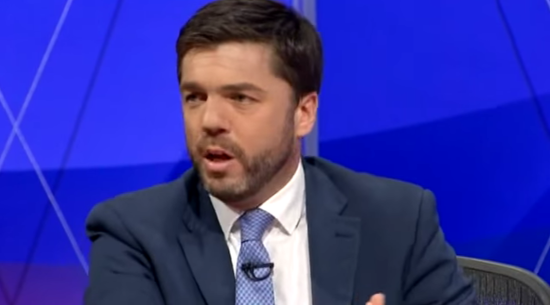 The U.K. LGBT site PinkNews reports that Crabb got his political start in the ’90s working with Christian Action Research and Education (CARE), an evangelical organization that has held events seeking to “cure” gay people. Sure, everyone has a job from adolescence they regret, but as recently as 2012, Crabb was also reportedly accepting paid interns from CARE.

He was known to have taken interns from Christian Action Research and Education (CARE), an organisation which co-sponsored the “Judaeo-Christian” event ‘Sex and the City: Redeeming sex today’ in 2012.

The £50-a-head conference included talks on “mentoring the sexually broken” from speakers including Jospeh Nicolosi, president of the National Association for Research and Therapy of Homosexuality and author of books on how to clinically “treat” being gay.

Crabb also voted against marriage equality in the U.K. in 2013. And while he’s not the only MP with previous ties to CARE and other anti-equality, anti-choice causes — as many as 20 MPs may have worked with CARE interns — he has been noticeably blasé about responding to the allegations.

But in the MPs’ rush to distance themselves from Care, Mr Crabb — who started his career as a Care intern — was conspicuous by his absence.

The member for Preseli Pembrokeshire has never spoken publicly about the charity, and does not refer to it anywhere on his website.

Crabb, 41, has, however, voted against equal marriage and aligned himself with the charity’s intended aim of tightening the laws on abortion. In 2011, he voted for an amendment, tabled by Tory MP Nadine Dorries, calling for “independent” organisations to start offering counselling advice to women considering an abortion.

Mr Crabb told The Telegraph: “I don’t support or endorse any views about ‘gay cure’ theology.”

Hmmm. “Gay cure” rhetoric is more than theology; it’s a form of abuse that is clinically proven to traumatize people, especially in cases of LGBT youth. If this is the best Crabb can do in distancing himself from such a toxic cause as he works his way up the political ladder, that’s a huge red flag.

(Screenshot via YouTube. Thanks to Martin for the link)

March 22, 2016 Ted Cruz and Donald Trump Have a Disastrous Plan to Repeat History After the Brussels Attacks
Browse Our Archives
What Are Your Thoughts?leave a comment