Responding to the Latest Unfair Accusation Against Sam Harris

Anyone who’s read Sam Harris‘ books or essays, or listened to his podcasts, knows one of his longstanding goals has been to get people to see what’s actually written in the Qur’an (and the Hadith). He doesn’t believe Islam is a “religion of peace” — as if any religion ever could be — though he readily admits many, many practicing Muslims are peaceful.

It’s infuriating to him when commentators reflexively dismiss Islam as a cause when discussing terrorism. The Charlie Hebdo attacks? The massacre at the Bataclan? The Islamic State? Those weren’t real Muslims, the pundits say, as if violence done in the name of religion automatically keeps religion off the hook.

For more than a decade, Harris has been trying to address the matter of how Islam, more than any other faith, is a threat to our civilization. After all, there are lots of followers — remember that a tiny percentage of 1.6 billion people is still a lot — who genuinely believe what their holy books say about the need to kill infidels and blasphemers. In his mind, that even justifies airport security personnel ignoring people who are obviously not Muslims (an idea, it should be noted, that one security expert said simply wouldn’t work in practice). 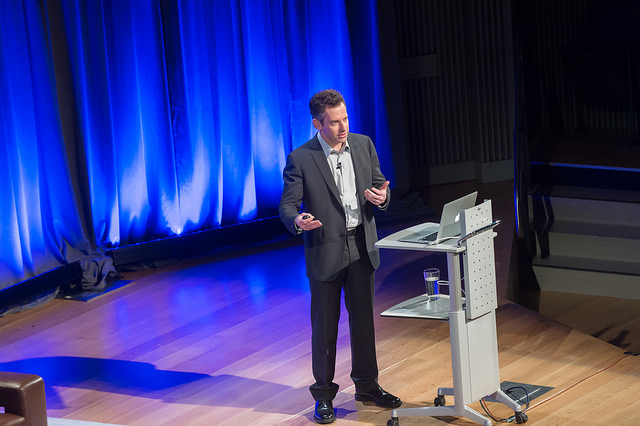 I consume a lot of what Harris puts out. Not because I agree with it all, but because I’m willing to hear him out. I like the thought experiments and new ideas. I like when people challenge him — and I think he does, too — because the result is (sometimes) a debate about specifics, rather than the superficial sound bite-heavy arguments we’re used to hearing in politics.

But in some of his recent podcasts, like with Maryam Namazie, it was an exercise in futility, even as a listener. That’s because the two sides were completely talking past each other. She had no clue what Harris’ positions really were, leading her to repudiate views he didn’t actually hold. When he attempted to correct her, he was accused of interrupting her and treating her in a condescending way. This sort of thing went on for a while.

So naturally, when Harris saw an article in Salon by Omer Aziz that completely misrepresented his views, Harris invited Aziz on his podcast to chat about it.

But just to make sure the conversation didn’t derail like some previous ones, Harris made two requests: First, that Aziz would read his Salon piece line-by-line on the podcast, after which they would discuss what he wrote. This seemed to be a good way to respond to what Harris deemed a hit-piece. It was the only way to respond to every single accusation in the article. The alternative would likely have been an argument that left a lot on the table. I thought that was a fair (and interesting) way to structure the conversation. Aziz would have to defend every line of what he wrote with Harris right there ready to respond if he felt something was unfair. (Imagine if a good reporter could get Donald Trump to do that after a rally speech…)

The second request was that if the conversation indeed derailed and became “boring,” Harris wouldn’t post it. I understood that request, too. Why post an hours-long podcast for your listeners if there was nothing of substance in it? Why waste their time? Obviously, if Harris didn’t post it only because he ended up looking bad, that would have been a legitimately bad move on his part.

The conversation happened. Aziz refused to read his article line-by-line. The discussion went nowhere. Harris chose not to post it online. Aziz later whined about that decision. And Harris eventually caved and published the podcast anyway. (Guess what? It was really boring.)

But this has become par for the course in Harrisland. Harris is frequently accused of holding positions that he doesn’t believe, which causes him to spend a hell of a lot of time explaining what he actually does believe. You can’t do that all the time, though. At some point, as we’ve seen with Trump, when the lies are thrown out so frequently and so rapidly, it becomes impossible to fact-check everything in a timely manner.

In Harris’ case, those lies have come in the form of verbal grenades on Twitter or Salon or other websites that never seem to reach out to him before publication to verify his actual positions.

The latest one, written by Andrew Aghapour and Michael Schulson of Religion Dispatches, asks whether Harris is a white supremacist. (The headline is written as a question, as if that makes the accusation acceptable.) They even compare him to Trump in the way he speaks about Muslims. It’s Peak Affleck.

Here’s the gist of their argument:

… Harris’ creed-based essentialism ends up dividing the world into two parts: educated, liberal, mostly-white Westerners who have an inordinate amount of power; and the mostly non-white rest of the world who are subject to that power.

It is in this sense that Harris really does resemble a white supremacist. Harris doesn’t see Muslims as a diverse set of individuals, but as a monolithic Other that is violent, out to get us, and in need of civilizing. Harris would point out that his rationalism and classical liberalism set him apart from right-wing ideologues, and certainly from a demagogue like Trump. In that bounded sense, he’d be correct. But his essentialism, his vision of geopolitical struggle, and his willingness to generalize about Islam all do resonate with contemporary demagoguery. And those overlaps may be more salient than specific differences in policy or epistemology.

To be clear, Harris is not endorsing white supremacy in the popular sense of the term; he doesn’t posit the essential superiority of whiteness. But when it comes to Islam, he has arrived at very similar conclusions. In doing so, he offers a dangerous example of how hardline atheist thinkers can evoke underlying prejudices under the guise of rational objectivity.

First of all, the authors answered the very question in their headline. Is Harris a white supremacist? No! As one commenter wrote, “Are Andrew Aghapour and Michael Schulson really crack cocaine smokers that pick up girls at their local elementary school in a van by offering them candy?” If the answer is no, then even if their actions are shady, it wouldn’t warrant such a loaded question.

Hmm…. "No"? Is that the answer you're groping for?https://t.co/ziilypQDvd@RDispatches

But they also mistake Harris’ views. They say he doesn’t see Muslims as individuals, but as monolithic. That’s the sort of thing you could only write if you’d never read his work. Not only did Harris write his latest book with someone who identifies as a Muslim, he’s actively praised Muslim reformers like Malala Yousafzai, and supported the work of moderate Muslims who want to reform the extremist views within the faith.

He doesn’t condemn all Muslims as violent or supportive of violence. Far from it. Rather, he sees Islam as a religion with holy writings that, when taken literally as they are by so many people, have already lead to death and destruction. Unless we can reform the faith, this won’t stop. And that won’t happen unless we’re willing to admit the problem lies in the core beliefs and the fact that some people take them at face value.

That’s not a popular opinion. Most pundits are afraid to say it, not because it’s wrong, but because they don’t want to deal with the backlash. They’ll blame the rise of ISIS, for example, on politics or dogma or U.S. foreign policy — rarely on Islam itself.

Saying that isn’t a condemnation of Muslims. (Or brown people, as the Dispatches article seems to suggest.) It’s pointing out the elephant in the room. Other religions, including Christianity, say horrible things in their holy books, too, but right now, Islam is the only religion where so many followers take those writings seriously, to the point where they’re willing to kill innocent people in the name of it.

If reporters or scholars want to challenge Harris on that, I have no doubt he’ll have a public debate with them. But to throw unfair, untrue accusation his way just to smear him — while admitting it’s not true in the article itself — is a cowardly way to discuss these issues.

Whenever Aghapour and Schulson get around to removing their heads from their asses, they owe Harris an apology.

March 21, 2016 American Atheists Will Appear on Tonight's Full Frontal
Browse Our Archives
What Are Your Thoughts?leave a comment