Bernie Sanders Is Proving You Don’t Have to Be Religious to Be Successful in U.S. Politics March 21, 2016 Hemant Mehta

Bernie Sanders Is Proving You Don’t Have to Be Religious to Be Successful in U.S. Politics

Danny Westneat of the Seattle Times says that no matter who wins the Democratic Party’s nomination, we should all be thrilled with the success of Bernie Sanders.

Not just because he’s moved the party a little more to the left, but because he’s made it that much more acceptable for major party candidates to basically ignore religion as a campaign issue: 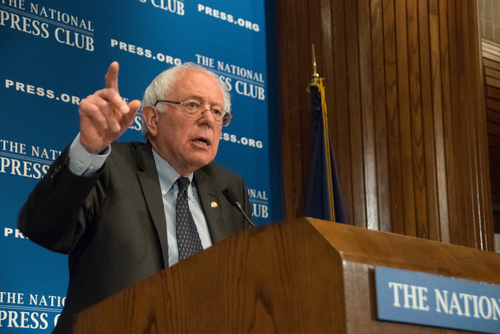 … Even more revolutionary is that he’s the first non-Christian to ever win a state primary or caucus.

He’s won nine states so far. What’s remarkable isn’t just how rare it is to have a major contender who doesn’t share the dominant religious beliefs of the nation. It’s that few seem to care, or even to have noticed.

… Christian belief has just been an unquestioned requirement for the job [of President]. The winner of the last two elections, Barack Obama, went out of his way (with mixed success) to try to prove he was a real Christian. The notion that church and state might be separate was slipping.

Now just a short time later, we not only have a non-Christian winning some primaries. But his non-Christian-ness is, to date, a complete nonissue. That’s a huge, and to me, very welcome shift.

His plan to break up the banks, that’s probably not going to happen. But this is bigger than that. He’s begun to break up one of the nation’s most enduring monopolies.

I couldn’t agree more. Of all the attacks people have used on Sanders, his minimizing of religion hasn’t really been one of them. Sanders says he’s Jewish, but not necessarily a practicing one. He supports church/state separation. And the issues he cares about are simply more important than his religious beliefs which have no place in his public policy proposals.

Keep in mind that Hillary Clinton, perhaps as a result of all this, hasn’t had to spend much time running on her religion, either. She can run on her résumé, obviously, but it’s striking that her mentions of God seem limited to generic ones (like the phrase “God-given potential”).

If you watched the Republican Party this year, you’d think it’s a competition over who loves Jesus most (and whom Jesus loves most in return). It’s like their platforms are all about where they’ll go in the afterlife.

You can give Donald Trump some credit for changing the focus of the discussion, but even he’s done plenty of faith-based pandering. Sanders hasn’t.

That will undoubtedly change in the general election. You can bet Ted Cruz will try to out-Jesus his opponents. Even Trump, somehow, will claim he’s more religious than the Democratic nominee. You can bet their supporters will let the anti-Semitic and atheist accusations fly.

But if nothing else, we’ve learned an important lesson from Sanders: An openly non-religious (or minimally religious) candidate can be successful in U.S. politics — at least in the primaries — as long as they focus on other, more relevant issues.

March 21, 2016 Letting Go of Religion... in 17 Beautiful Pictures
Browse Our Archives
What Are Your Thoughts?leave a comment