Sen. Al Franken Called Out Republican Obstructionism to Their Faces and It Was Glorious March 19, 2016 Hemant Mehta

Sen. Al Franken Called Out Republican Obstructionism to Their Faces and It Was Glorious

It’s one thing for Senate Republicans to pretend that they’re taking an honorable stand by not holding confirmation hearings for Supreme Court nominee Merrick Garland. It’s another thing altogether when they’re confronted on their hypocrisy by one of their fellow senators.

Senator Al Franken (D-MN) laid into the GOP members of the Senate Judiciary Committee this week, challenging them on how this isn’t about principle at all. It’s about obstruction and nothing more. 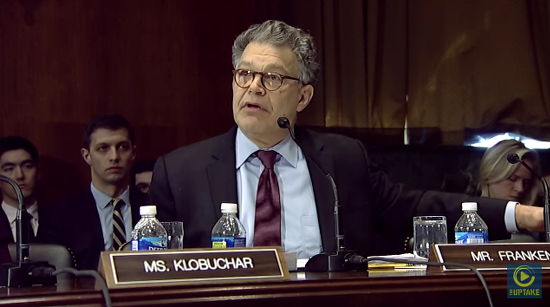 Can we get more former comedians in the Senate? They’re experts at calling out bullshit.

If only the general public would get in line with that. But when so many people are duped into thinking Donald Trump would be a great President, can we really expect them to understand when they’re being conned by an entire political party?

March 19, 2016
Planning Board Stops Saying Pledge of Allegiance at Meetings; Why is This Controversial?
Next Post

March 19, 2016 Donald Trump, Whose Own Faith is Questionable, Asks of Mitt Romney: "Are You Sure He's a Mormon?"
Browse Our Archives
What Are Your Thoughts?leave a comment