Donald Trump, Whose Own Faith is Questionable, Asks of Mitt Romney: “Are You Sure He’s a Mormon?” March 19, 2016 Hemant Mehta

Donald Trump, Whose Own Faith is Questionable, Asks of Mitt Romney: “Are You Sure He’s a Mormon?”

At a rally in Salt Lake City yesterday, Donald Trump called out former Presidential candidate and current political opponent Mitt Romney by asking the crowd if Romney was really a True Mormon™. 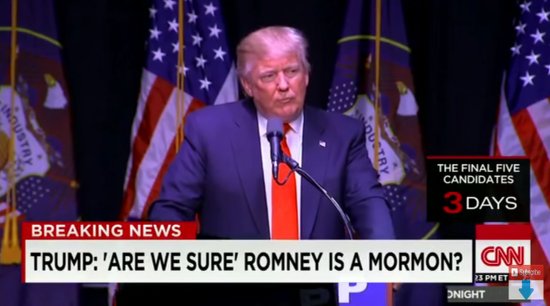 After first praising Mormons generally — “And do I love the Mormons, O.K.?” Mr. Trump said. “Do I love the Mormons?” — Mr. Trump added that he has many friends in Salt Lake City. But he noted pointedly that Mr. Romney, who has been urging Republicans to deny him the presidential nomination, is not one of them.

“Did he choke? Did this guy choke? He’s a choke artist,” Mr. Trump said, referring to Mr. Romney’s loss to President Obama in 2012. Mr. Trump added, “Are you sure he’s a Mormon? Are we sure?”

As anyone who paid attention to politics in 2012 will tell you, there were plenty of things about Romney that were questionable: how much he really cared about poor people, whether he loved corporations even more, why he would lambaste an Obama healthcare plan that was modeled after his own, etc.

But his devotion to his faith wasn’t one of them. His family is quintessentially Mormon.

Meanwhile, Romney’s faith is being doubted by someone who says the Bible is the greatest book ever yet doesn’t know how to say “2 Corinthians.” He doesn’t have a favorite passage. He can’t decide what he likes more: The Old Testament or the part with Jesus in it. He doesn’t ask for forgiveness because he thinks he can do no wrong. He picks fights with the goddamn Pope. He doesn’t want to reach out to the downtrodden; he wants to kick them out of the country.

This is how Trump works, though. He’ll question Obama’s birthplace, Ted Cruz‘s citizenship, and Ben Carson‘s Seventh-day Adventist faith just because he can, not because there’s any reasonable doubt to have.

The moment Trump is challenged on any of his own positions, though, he’ll resort to name-calling and deflection.

This is the man Republicans believe is most capable of leading the country.

March 19, 2016
Sen. Al Franken Called Out Republican Obstructionism to Their Faces and It Was Glorious
Next Post