A Creationist Astronaut Just Went Up Into Space as Part of the Latest NASA Mission March 19, 2016 Hemant Mehta

If there’s one thing we learned from the rise of Dr. Ben Carson this past year, it’s that you can be a skilled neurosurgeon and a complete idiot at the same time. You can graduate medical school and rise to the top of your field… while still denying evolution. You can be compared to a child molester and immediately turn around and endorse that person for President.

We can all be walking contradictions, is what I’m saying.

But it’s still weird to know that astronaut Jeffrey Williams, who was launched into space yesterday as part of NASA’s Expedition 47 team, is a Creationist. 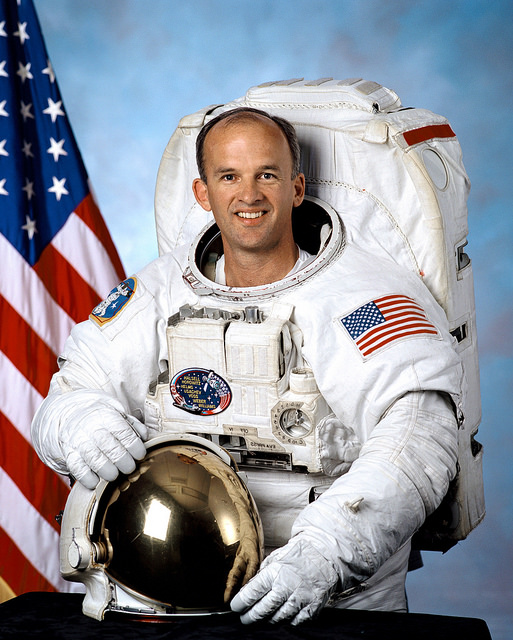 It’s true. For years, people have dreamed of launching Creationists into space, and now there’s finally one up there.

“There is a generalization that anyone who worked for NASA, or an organization like that, would naturally be an atheist, but that’s not true,” Williams told the Institute for Creation Research in an interview last year. “There are many Christians in the organization, many Christians in other government agencies — there are Christians everywhere. The work that I do and have done through my military career and with NASA has been perfectly compatible with the Scriptures, and I’ve lived out my life as a Christian, and there’s been no issue there.”

In that interview with the Creationist group, Williams offered evidence of biblical truth:

ICR: Can you see any evidence of the Flood from the ISS?

JW: Absolutely. And it’s not just the rising waters. The Scriptures give reference to geological movements and the fountains coming from the deep, and very likely volcanic activity and earthquakes and other things, and shifting of land masses, and when you see the earth from that vantage point you see evidence of all of that, and it looks like it occurred rapidly. It only gives evidence and illustrates the account of Scripture. When you look at the earth from that vantage point, you see volcanos everywhere, some of them still erupting, others dormant, and you see geological formations that are incredible. Or you go to eastern Iran, and you see very unique formations of salt domes — fascinating geometric designs. Or you go to Australia, which looks like we’d imagine another planet to look like. I have about 200,000 pictures from space.

It’s unclear if Williams is a Young Earth or Old Earth Creationist, but his support of ICR suggests the former. It’s also disturbing that a NASA astronaut has such little respect for science that conflicts with his faith.

Is he capable of performing experiments in space? Sure he is. Is he skilled in his profession? No doubt. But that doesn’t mean he accepts the scientific method on a philosophical level.

Just as with Carson, you can be compartmentalized within the sciences to the point where you don’t need to understand evolution in order to do your job (or even do it very well). You don’t need to understand the Triangle Offense to be a great basketball coach, and you don’t need to be a legal expert to help divorced couples in their custody cases. But when you start contradicting what the finest minds in your field have been saying for years, the odds are pretty good that you’re the one who doesn’t get it.

Williams may be a great astronaut just as Carson was a great neurosurgeon. That doesn’t mean, however, that either of them is a great scientist.

(Image via NASA Johnson. Thanks to Brian for the link)

March 19, 2016
Rapper Killah Priest Urges Atheists to "Be Vocal About It" in New Openly Secular Video
Next Post

March 19, 2016 Nebraska's Atheist State Senator May Filibuster Bill Allowing Anti-Gay Discrimination in Foster Care
Browse Our Archives
What Are Your Thoughts?leave a comment