According to a new poll by Gallup, Americans are taking global warming more seriously than ever before.

More importantly perhaps, since it could lead to policy change, 65% of Americans now accept that “increases in the Earth’s temperature over the last century are primarily attributable to human activities rather than natural causes.” That’s an incredible 10 point jump from just a year ago: 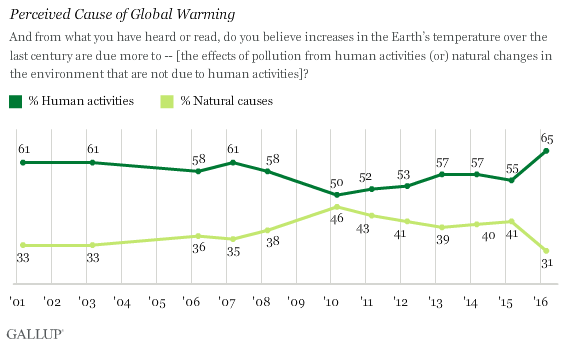 To no one’s surprise, Democrats are much more accepting of the science of climate change. 85% of them say human activity contributes to the global temperature increased, compared to only 38% of Republicans.

The rest of the GOP seems to be convinced by Sen. James Inhofe, who thinks the existence of a snowball contradicts everything scientists understand about the subject.