A List of All the Republican Presidential Candidates Who Thought God Wanted Them to Run for Office March 17, 2016 Hemant Mehta

One of the storylines from this election that will last far beyond this campaign season, I hope, is how many candidates said that God wanted them to run for President… only to dash their hopes months later. God loves playing practical jokes with politicians, I guess.

The current Republican frontrunner Donald Trump claims to be a man of God, though his actions don’t show it at all. He can’t even pretend to be a practicing Christian without screwing up. 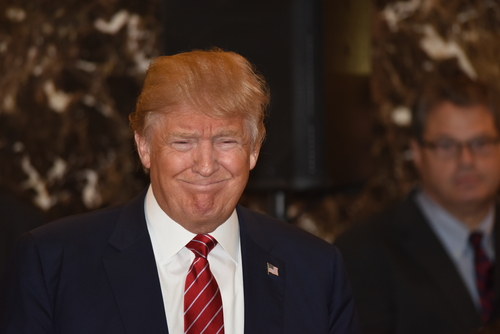 That’s why it seems like a good time to revisit all the candidates who directly or indirectly said God had a hand in convincing them to run for office.

Nearly all of them have since dropped out of the race.

As you can imagine, the months leading up to my announcement that I would run for President of the United States were filled with a lot of prayer and soul searching.

Here’s why: I needed to be certain that running was God’s calling — not just man’s calling. I am certain: This is God’s plan for me and I am humbled to be a candidate for President of the United States.

Walker dropped out long before the first primary votes were cast.

When asked by the Christian Broadcasting Network’s David Brody if God had grabbed him by the collar yet about a potential presidential run, Carson responded with, “I feel fingers.”

He officially dropped out earlier this month, though the momentum had been fading for some time.

While he stayed away from saying God wanted him to run this time around, God certainly egged him on four years earlier. He explained to a radio host at the time:

And then this just entire organic buildup of people who basically said, you know, for whatever reason, we’re not comfortable with the host of people who are coming forward to say they want to be the next president of the United States. And we look at your record, we look you and we want you to do this. And it has been an incredible outpouring and I can tell you that has given me the calmness in my soul that, you know, God sends messages through a lot of ways and through a lot of messengers.

Perry was the first person to drop out this time around.

Much like Rick Perry, Santorum avoided saying God wanted him to run this time around. But in 2011, his wife made clear that Rick was running because it was part of God’s Plan.

The former Pennsylvania senator’s wife, Karen, told CBN News in 2011 that her husband’s candidacy was about “defending God’s truth in the world,” explaining that “it really boils down to God’s will. What is it that God wants? … We have prayed a lot about this decision, and we believe with all our hearts that this is what God wants.”

Santorum didn’t get very far at all this year, dropping out shortly after the Iowa caucuses.

As you might expect from the evangelical Christian, Huckabee asked people to pray for God’s blessing for him to get in the race:

And whether it’s me or someone else, and I do ask people to pray. For me, this is not just a political or financial decision, it is a spiritual decision. You know, the only thing worse than not being elected president would be to be elected president without God’s blessing. I can’t think of a worse place in the world to be than in the Oval Office without God’s hand upon you. I’d rather not get near the place. But if that’s a purpose, so be it. And that’s my prayer.

He also dropped out right after the Iowa caucuses.

Paul briefly alluded to God in his campaign announcement:

To rescue a great country now adrift, join me as together we seek a new vision for America. Today I announce with God’s help, with the help of liberty lovers everywhere, that I am putting myself forward as a candidate for president of the United States of America.

He joined the club of post-Iowa-Caucus dropouts.

Rubio mentioned God briefly in his announcement, though it wasn’t until later in the campaign when he really played the religion card:

I recognize the challenges of this campaign, and I recognize the demands of this office that I seek, but in this endeavor, as in all things, I find comfort in the ancient command: be strong and courageous. Do not tremble or be dismayed for the Lord your God is with you wherever you go.

Rubio finally dropped out this week after God couldn’t even get his home state of Florida to give him a victory. He said on Tuesday night, “it is not God’s plan that I be president in 2016 or maybe ever.”

My family is a consideration, and number two, the most important thing is, what does the Lord want me to do with my life? You know, he puts us on Earth, all of us on Earth, to achieve certain purposes, and I’m trying to determine if this is what the Lord wants, and I’m not going to figure that out laying in bed hoping lightning strikes, so I’m out there one foot in front of another. We’ll see what happens.”

Kasich is currently a distant third in the race, hoping that a contested Republican nominating process (not exactly the divine hand of God) will propel him to victory.

Cruz, the Constitution-lover who seeks to dismantle the First Amendment, announced his campaign at Liberty University and ran because his wife received a cryptic sign from God. Here’s how his father Rafael Cruz told the story:

My son Ted and his family spent six months in prayer seeking God’s will for this decision. But the day the final green light came on, the whole family was together. It was a Sunday. We were all at his church, First Baptist Church in Houston, including his senior staff. After the church service, we all gathered at the pastor’s office. We were on our knees for two hours seeking God’s will. At the end of that time, a word came through his wife, Heidi. And the word came, just saying, “Seek God’s face, not God’s hand.” And I’ll tell you, it was as if there was a cloud of the holy spirit filling that place. Some of us were weeping, and Ted just looked up and said, “Lord, here am I, use me. I surrender to you, whatever you want.” And he felt that was a green light to move forward.

Cruz is still in the race, though it doesn’t look like he’ll be able to beat Trump in terms of delegates.

That means one of the least religious candidates on the Republican side — no matter what he says to the contrary — is on track to get the Party’s nomination. So much for God’s will.

To their credit, Jeb Bush, Chris Christie, Carly Fiorina, Jim Gilmore, Lindsey Graham, Bobby Jindal, and George Pataki didn’t make overt mentions of God in their campaign announcements. They may have brought up religion during the campaign, but it didn’t help.

I hope future candidates remember all this. If the reason you’re running is because God wants you to, He’s probably lying. You better have legitimate reasons for wanting to be in the White House. Otherwise, it’s almost a guarantee that you’ll be eating your words before long.