A Christian Professor Shares How Her Bible-Based, Husband-Led Marriage Led to Domestic Abuse

Ruth Tucker was married to an ordained minister for about 20 years. On paper, that might sound like a great union, but the reality was far more disturbing. Tucker became the subject of his violent rages as he tried to force her into submission. She and her son eventually escaped in 1987.

The longtime professor has now written a book documenting her experiences and urging Christians to adopt a more egalitarian approach to marriage, as opposed to a complementarian one that says men are always the head of the household. 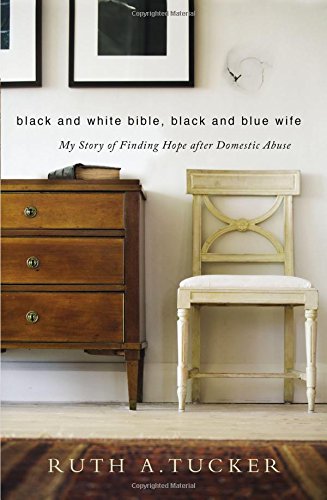 In the excerpt below, she writes about one of those violent outbursts, how her son Carlton protected her, and how she remained silent about it even then:

It was a cold West Michigan evening in March. Spring quarter at Trinity [Evangelical Divinity School] had begun a week earlier. I recognized my husband’s mood before we had even sat down for the evening meal. When we finished eating, I tidied up the kitchen, took my books and notes and went upstairs while he watched his usual TV programs and Carlton did homework nearby, listening in as he typically did.

After an hour or so I heard my husband’s footsteps on the stairs. I stiffened, dreading the worst. He entered our bedroom where I was hunkered down, and then seemingly out of the blue, with not so much as a segue into the topic, demanded to know my interpretation of a particular biblical passage that related to women. I explained that I was very busy in course preparation and did not wish to discuss the matter, particularly because I knew it would create problems. He proceeded to give me his interpretation of the passage. When I remained silent and refused to agree with him, he became irate and began very loudly threatening me and exclaiming that he would not let me fly to O’Hare in the morning. He yanked me from where I was sitting, my papers flying in every direction.

Hearing his father shouting, Carlton was up the stairs two steps at a time. It was not the first time he sought to defend me. Normally, his crying out at his father put an end to violence. But not this time. My husband demanded he leave the room while at the same time squeezing my arms with all his might and viciously shaking me. Carlton did leave. He raced back to his own room and grabbed two knives, one no more than a hard plastic toy, the other a Swiss Army knife that he had managed to open before returning to confront his father. At twelve, Carlton was tall and lanky, but no match for his six-foot-two father who could do a hundred pushups without breaking a sweat.

When I saw the knives, I screamed for Carlton to get out, but within seconds my husband had thrown him to the floor, taken the knives and was coming at me again. In a second, Carlton got back up and tackled his father crying out at the top of his lungs. And then somehow amid the mayhem it ended. My husband left the room still raging, ordering Carlton to come downstairs with him.

The next afternoon I was in Deerfield, in my classroom greeting students and wearing a turtleneck and blazer that conveniently covered the bruises — black and blue finger marks on my upper arms. I had taught the course before and once I was into my rhythm and lively discussion was underway, I was in another world. After the class ended in the late afternoon and all the students had checked with me on term projects, I gathered my books and notes and began making my way over to the little apartment on campus where I stayed. My real life flooded over me, covering me like a shroud — like a shroud of pitch-black oily fright. A quick call home to Carlton relieved the tension. But the situation seemed hopeless. Our little family was a complete mess. Where would this all end?

There are many underlying factors to consider in attempting to understand why a husband would beat and terrorize his wife. I’m certain a psychiatrist could write an entire volume on my ex-husband. But from my vantage point, his perspective on male supremacy and female submission was front and center. He repeatedly quoted Scripture to defend his headship and to enforce my unconditional obligation to submit — from the “kitchen to the bedroom.” He might have added to that list my home office where I prepared lectures. His rule was absolute and final — most notably during his violent moods. Black and white Bible, black and blue wife.

Why didn’t I just pack up and leave with Carlton? That’s a complicated question and will be dealt with throughout this volume. Perhaps a more appropriate question that relates specifically to this chapter is: Why didn’t I tell this very story to that full house at Wheaton? It’s a story the audience — students, staff, faculty, and visitors — needed to hear. I was a professor, like Wheaton professors. The crowd could relate to that. And here I was, a woman, a wife, a mother standing before them. I was exhibit A.

It’s hard enough for women to come forward with stories like this. It’s even harder when they have as much to lose as Tucker does with the Christian community. She deserves a lot of credit for being so forthright in this book.

Black and White Bible, Black and Blue Wife is now available online and in bookstores.

Excerpted from Black and White Bible, Black and Blue Wife: My Story of Finding Hope after Domestic Abuse by Ruth Tucker (Zondervan, 2016). Reprinted with permission from Zondervan.

March 16, 2016 Teacher Who Led Students Out of Religious Assembly Will Resign After Accusations of Racism
Browse Our Archives
What Are Your Thoughts?leave a comment