The Bracket is Set for the Most Anti-Church/State Separation Bills in America March 15, 2016 Hemant Mehta

Time to fill out your bracket!

The Secular Coalition for America is pitting against each other 16 state bills that promote religion through the government. Voters will get to choose the “Worst State Bill.” 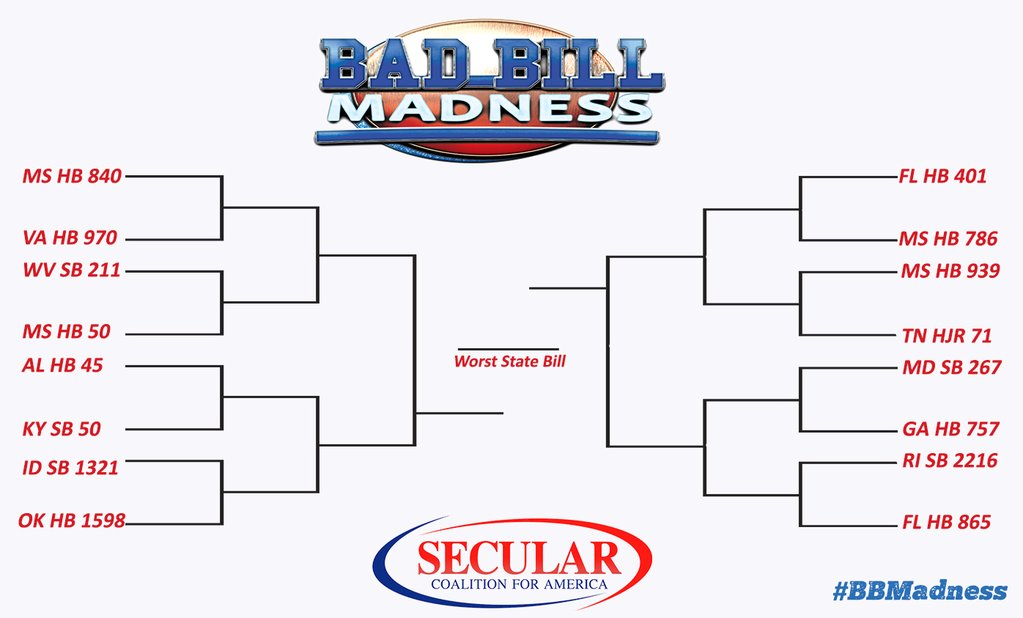 Kentucky, HB 50: This bill would keep schools closed until the end of August in order to allow the state’s brand new “Noah’s Ark” museum to extend its tourist season.

Mississippi, HB 786: This bill would allow church members to commit a felony, including murder, if doing so on behalf of the church’s “security program.” The bill says this could be considered a “justifiable homicide.”

Rhode Island, SB 2216: This bill would ban a common abortion procedure and includes intentionally gruesome and misleading language, including references to “extracting” an “unborn child one piece at a time.”

This may be the only bracket where the ultimate winner will upset all voters.

And Mississippi managed to get four spots in the bracket! Very impressive… by which I mean I’m facepalming many times over.

In case you’re wondering who won in the past,

Last year’s Bad Bill Madness competition crowned South Dakota’s SB 114 the winner. The bill was one of many “academic freedom” bills introduced in 2015 which would have allowed public school teachers to insert their own ideological agendas in the classroom, even if it was contrary to the scientific consensus. The bill ultimately failed in committee in a 4-2 vote.

Obviously the whole point of this is to remind people these these are real bills being passed in certain states. If you live in the affected areas, you shouldn’t just vote. You should be emailing your representatives and lobbying in person if possible. Encourage them to reject these bills.