If you believe God created this planet, shouldn’t you do everything in your power to protect it?

You would think so, but law professor Jay Wexler finds that the connection between religion and the environment is very weak in his new book When God Isn’t Green: A World-Wide Journey to Places Where Religious Practice and Environmentalism Collide (Beacon Press, 2016): 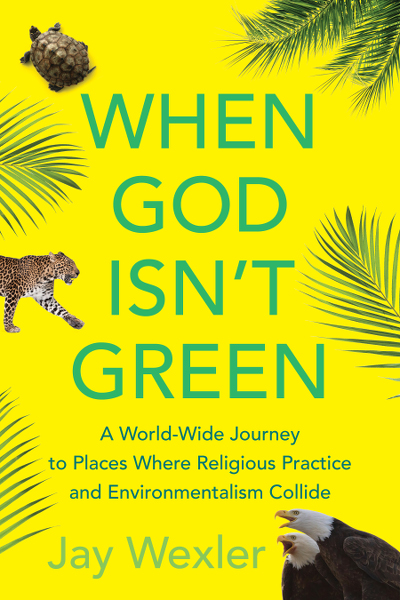 In the excerpt below, Wexler discusses how two time-honored Hindu rituals create more problems than they solve:

Religious practices have caused water pollution in lots of places around the world — anything, for example, that harms the land, like the pilgrimages I talked about earlier, will also likely threaten water supplies — but the country where this problem takes center stage is India. Google “religion” and “water pollution,” and you’ll see what I mean. Considering the frequency, exuberance, and number of participants in religious celebrations in India, the events are bound to cause at least some degree of water pollution. Add to this the fact that so many people in India lack access to freshwater supplies, and the problem becomes extremely pressing.

Take, for example, Holi, a festival celebrated throughout India and other parts of the world with significant Hindu populations. During Holi, in addition to setting air-polluting bonfires, celebrants mark the beginning of spring by throwing abundant quantities of colored powders and liquids at each other. I have never personally witnessed a Holi celebration, but from the pictures I’ve looked at online it looks truly unbelievable — really wild and super fun. Everyone is running around the streets and parks and temples throwing handfuls of bright-colored powder everywhere and tossing water balloons filled with colored water at their friends and neighbors until everybody and everything is covered with a thick dusting of brilliant yellows and reds and greens and purples. The aftermath looks like a bomb went off in a Crayola crayon factory. Everyone is happy and smiling and dancing and seemingly having the time of their lives.

Except that, of course, a lot of this stuff is dangerous. This wasn’t the case back when the colors were made from natural sources like flowers and leaves and turmeric, but now that most of the colors are made from chemicals, like lead oxide and aluminum bromide, the practice has become a problem. For one thing, coming into direct contact with the chemical dyes can harm your skin and eyes and throat and lungs. More to the point, though, the chemicals also end up in rivers and lakes and other water bodies, which, in India, tend to be suffering already from a great deal of industrial, municipal, and agricultural pollution.

Scientists have recognized the problem. A recent paper, titled “Impact of ‘Holi’ on the Environment: A Scientific Study,” by two Rajasthan scientists, for example, describes the problem: “The discharge of the toxic colors in the soil and water has a deleterious effect on the water resources, soil fertility, microorganisms living in these habitats and the ecosystem integrity on the whole. These colors are not readily degradable under natural conditions and are typically not removed from waste water by conventional waste water treatments.” Likewise, a number of environmental activists and NGOs have started pushing for more eco-friendly Holi practices, including a return to natural dyes. As the scientific article concludes: “We believe that large-scale efforts to increase public awareness regarding the health hazards of harmful colors, widespread availability of safer alternatives at affordable prices, and governmental regulatory control on the production and selling of hazardous chemicals will go a long way in a safer and environment-conscious celebration of this vibrant festival.”

And then, of course, there is the Ganges River. This sixteen hundred-mile-long river that flows from the Himalayas through India and Bangladesh into the Bay of Bengal is the most revered river among Hindus. Many Hindus believe that the river is the home of the goddess Ganga, a gift from the gods, or the earthly incarnation of the gods, and that bathing, drinking, or having their ashes scattered in this sacred river will wash away their sins and bring them closer to salvation. Unfortunately, the Ganges is also one of the most polluted rivers in the world. Among other things, the river is filled with garbage; dead bodies, both animal and human; hazardous chemicals like DDT and PCBs; and fecal coliforms, which are thought to be present in concentrations thousands of times higher than the safe level. Scientists believe the water from much of the river is not even clean enough for agricultural use, much less for drinking or swimming. The pollution causes all sorts of health problems, including skin rashes, infections, parasitic diseases, birth defects, and cancer, for the four hundred million or so people who live near the river. In his recent book Being Mortal, the well-known surgeon and writer Atul Gawande tells the moving story of scattering his father’s ashes in the Ganges. The ritual requires Gawande to drink some of the river water, and even though he takes antibiotics as a precaution against infection, he ends up contracting giardiasis.

Most of the pollution in the Ganges, of course, comes from industrial and raw sewage discharge, but a not-insignificant amount of it, particularly at certain locations and during certain times, comes from religious practices. The massive amount of ritual bathing contributes pollution to the river, especially during peak periods such as the occasional Hindu festival of Kumbh Mela, the most recent of which in 2013 brought over a hundred million people to bathe in one portion of the Ganges. During the festival that year, the biological oxygen demand level of the river, which is an indication of the organic pollution present, rose to twice the recommended level on just the very first day at the site of the mass bathing. At the point of the river where it passes through the famous holy city of Varanasi, things get particularly grisly. Here, tens of thousands of Hindus are cremated every year so their remains can be scattered in the river. The cremation rituals take place on ghats, or steps that lead down from the town to the river. Often, the cremation ceremony does not completely burn the dead bodies (and other times, people who are too poor to pay for cremation simply have their corpses left in the river), so the section of the Ganges that passes through Varanasi is littered with floating corpses and partial corpses. Still, despite the fact that one estimate places the biological oxygen demand near this area as fifteen times the safe level for bathing, and despite the fact that bumping into a rotting dead body while doing the crawl stroke is a real possibility, people continue to bathe and swim in the water.

True story: My family also scattered my grandmother’s cremated ashes in the Ganges. (We’re not Hindu. We’re just brown.) Symbolism aside, the whole process was far more depressing than cathartic as we realized how polluted the river was. You could tell my parents were having second thoughts while the ceremony took place.

When God Isn’t Green is now available online and in bookstores.

Excerpted from When God Isn’t Green: A World-Wide Journey to Places Where Religious Practice and Environmentalism Collide by Jay Wexler (Beacon Press, 2016). Reprinted with permission from Beacon Press.

March 15, 2016
Once Again, a Louisiana Legislator Is Trying to Repeal the State's Illegal Pro-Creationism Law
Next Post