The Jehovah’s Witnesses Are Patting Themselves on the Back for Winning an Award They Paid For March 14, 2016 Hemant Mehta

If you wanted to win an award for, say, making movies, there are a couple of ways to do it.

You could produce a quality film, send it to the Academy Awards people, and hope the voters recognize your submission. But that’s a lot of work. It requires making a good movie, for one. You might have to lobby voters to support your film. And even then, you might lose.

The other option is just buying yourself an award, engraving your name on it, and telling everyone you won something special! I mean, who’s really going to double-check how legitimate it is?

With that in mind, you should all give a huge round of applause to the Jehovah’s Witnesses. They just won a couple of Telly Awards! 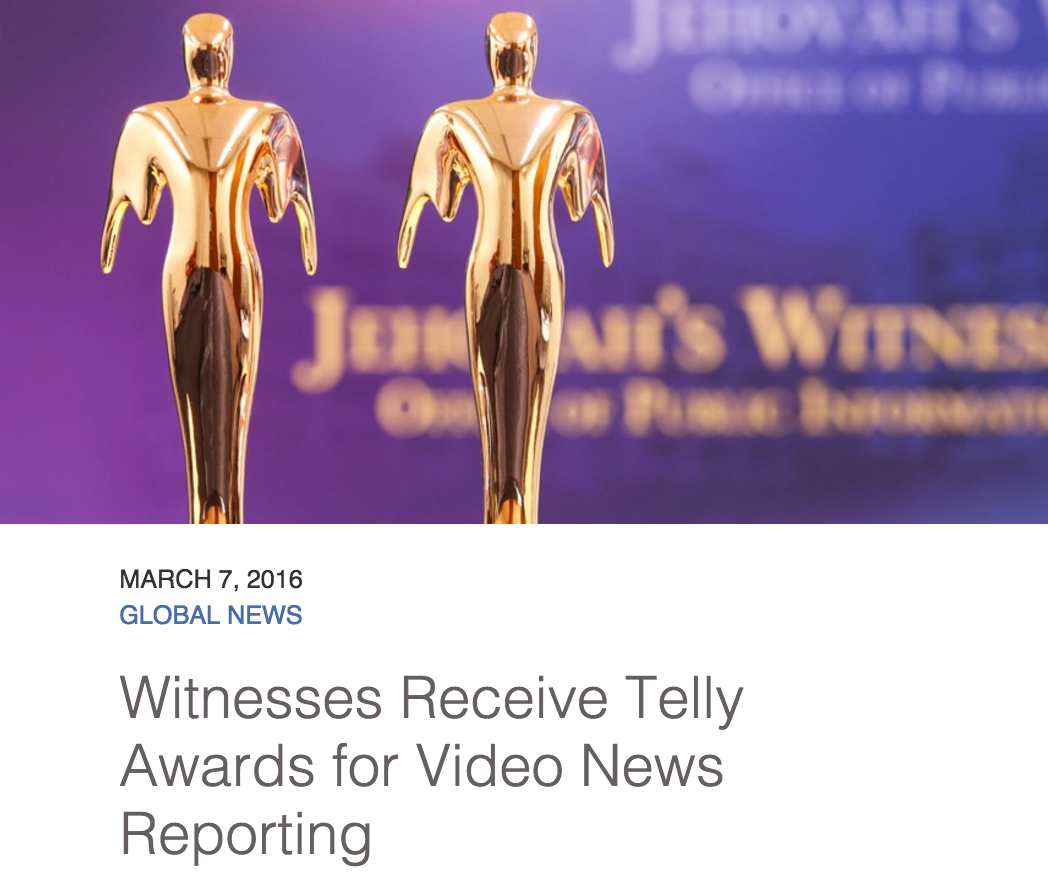 The Telly Awards were founded in 1979 to honor outstanding television commercials and programs, video and film productions, and web videos and films. The field for 2015 was made up of over 12,000 qualifying entries produced between 2013 and 2015. “The Telly Awards has a mission to honor the very best in film and video,” said Linda Day, executive director of the Telly Awards. “The Witnesses’ accomplishment in the jw.org Newsroom illustrates their creativity, skill, and dedication to their craft and serves as a testament to great film and video production.”

The reaction the JW leaders want you to have is, “Wow! They’re being recognized by a mainstream group for spreading Jehovah’s message! This is incredible!”

The reaction you should have is, “What the hell is a Telly Award…?”

John Redwood, writing at JWSurvey (a Church watchdog website), goes to great lengths in explaining how it’s not a real award, how you need to pay money to get the engraved trophy, how the Church has indeed been doing this for years, and how even the press release is pure bullshit.

How does it work? When Watchtower produces a video or online news release, it uploads the video or URL to Telly using a web submission form, paying for this opportunity according to the number of entries and categories chosen. Per the Telly website: “The Telly Awards Final Entry Fee is $105 (U.S dollars) for single entries and $190 (U.S Dollars) for campaign entries.”

After the published “deadline” for entries, Telly contacts the “contestant” and advises them that they have won, in most cases, either a silver or bronze award. Once notified, the organization must cough up $210 U.S. for the trophy, which weighs approximately 4.5 pounds, one half the weight of an Oscar. You would think that a frame-able certificate would come with your victory, but sadly, this too is for sale — for $45.00.

While Telly claims to be hosting the “37th Annual” awards contest, messages posted on their Facebook group and website indicate that there are multiple “deadlines” and “extended deadlines,” clearly raising suspicions that the Telly organization is more concerned with collecting entry fees than in maintaining the integrity of their so-called competition.

More importantly, there’s no real competition taking place. Unlike the Oscars, it’s not you against everyone. If all of you pay the entry fee, all of you can win!

Just look at how many Silver Award winners there were last year.

But the kicker may be that press release from the Witnesses. It’s literally copy/pasted from the sample press release issued by the Telly Awards, which says this:

“The Telly Awards has a mission to honor the very best in film and video,” said Linda Day, Executive Director of the Telly Awards. “[Company Name’s] accomplishment illustrates their creativity, skill, and dedication to their craft and serves as a testament to great film and video production.”

Way to fill in the blanks there, JWs… did Jehovah guide you through that process?

What an act of desperation. It’s pathetic, really.

And in case you’re doubting the lack of prestige for these awards, it turns out the Church of Scientology has “won” the same award, too.

Congratulations are due to nobody.