At a Donald Trump rally in North Carolina this morning, his opening act, pastor and televangelist Mark Burns, told the crowd that Bernie Sanders “doesn’t believe in God,” adding, “Bernie gotta get saved. He gotta meet Jesus… He gotta have a ‘coming to Jesus’ meeting.”

Bernie Sanders, of course, is Jewish. He has never said he’s an atheist.

You can see the comments at the 5:28 mark in the video below: 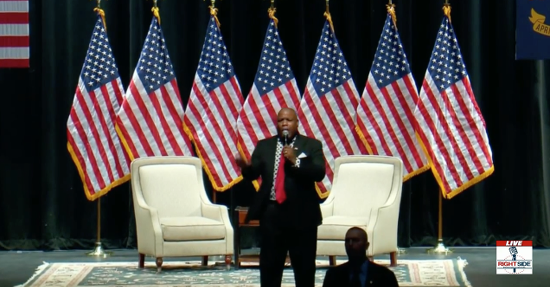 Besides the idiocy of slamming another candidate on the basis of his religion, it doesn’t even make any sense.

As the saying goes, Jesus was a Jewish socialist. He reached out to the minorities of his time. He helped the poor and said, “it is easier for a camel to pass through the eye of a needle than for a rich man to enter the kingdom of God.”

Sanders seems to have the “Jesus” concept down pat.

Meanwhile, Trump can’t even get Christianity right. He doesn’t ask for forgiveness, swears like a sailor, misstates Bible verses, and urges mobs to go after his enemies.

None of the candidates need to find Jesus. But if anyone needs to, Trump has a much longer way to go.

Burns, who’s black, also added in his speech that “All lives matters,” a rebuke of the #BlackLivesMatter movement. He’s been condemned by other African-American pastors for backing Trump.

March 14, 2016
A Skeptics Group Has Been Documenting Televangelist Peter Popoff's Letters for the Past Year
Next Post