The Bishop Who Arranged Pope Francis’ Meeting with Kim Davis No Longer Has a Job March 13, 2016 Hemant Mehta

Last September, we learned that Pope Francis, during his *totally* non-political trip to the U.S., managed to squeeze in some time to meet Kim Davis, the Kentucky bigot who believed her Christian faith trumped the rights of gay couples to get married. 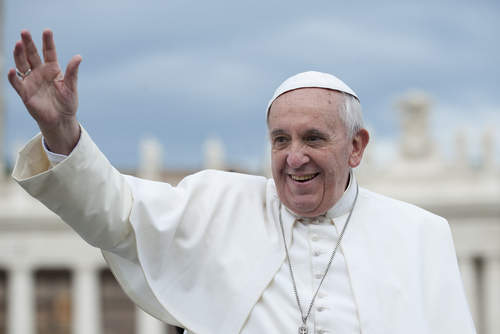 The Pope presumably wouldn’t have met with Davis unless he supported what she had done, and that’s why the encounter turned into a PR disaster for the Vatican. Everyone wanted to know what the meeting meant. For a lot of atheists, this was confirmation that the Pope and Kim Davis had far more in common than the media would have you believe. That would make sense, since he opposes marriage equality and believes homosexual acts are “intrinsically disordered,” despite getting good press by rhetorically asking, “Who am I to judge?”

Vatican officials were quick to play ignorant, insisting the Pope knew nothing about the situation:

“The pope did not enter into the details of the situation of Mrs. Davis, and his meeting with her should not be considered a form of support of her position in all of its particular and complex aspects,” the Rev. Federico Lombardi, the Vatican spokesman, said in a statement released on Friday morning.

At the Vatican on Friday, a spokesman, the Rev. Thomas Rosica, said the invitation had been extended by the office of Archbishop Carlo Maria Viganò, the nuncio, or envoy, in Washington, not from Rome.

Father Rosica said of the controversy: “I would simply say: Her case is a very complex case. It’s got all kinds of intricacies. Was there an opportunity to brief the pope on this beforehand? I don’t think so. A list is given — these are the people you are going to meet.”

In short, Viganò arranged the meeting, and Pope Francis had no idea what the hell was going on. If anything, he was probably only told she was a persecuted Christian. He told her to “Stay strong” in a private meeting, and that was that.

Mat Staver, the Liberty Counsel attorney representing Davis, had a different story. According to him, this was all pre-planned, the Vatican reached out to them, and the Pope knew exactly who Davis was:

“Not only did Pope Francis know of Kim Davis, he personally met with her to express his support,” concluded Staver.

Staver also insisted the Vatican would eventually release pictures of the meeting.

We’re still waiting on those.

Well, the Vatican is finally pushing out Viganò, the man responsible for setting up that meeting. Lucky for the Vatican, there’s a good excuse for his firing that allows them to avoid any mention of Davis.

The Vatican will appoint Archbishop Christophe Pierre to be the new ambassador to the United States, replacing an ambassador whose tenure has sparked controversy, reports say.

The current Vatican ambassador to the U.S., Archbishop Carlo Maria Viganò, has reached the statutory retirement age, according to [Jesuit publication] America.

Though, as Joe Jervis points out, while bishops are supposed to retire at 75, Canon Law makes clear that “it is up to the Holy See to decide when such resignations are accepted.”

I’m sure they couldn’t wait to accept this one.

(Image via neneo / Shutterstock.com. Portions of this article were posted earlier)

March 13, 2016
Let's Hope the Bible Isn't the Only Source of Your Morality
Next Post