In Oregon, one of the few states where Democrats control the legislature and governorship, there’s an odd situation where committee hearings at the Capitol require those testifying to swear an oath that includes the phrase “So help me God.” 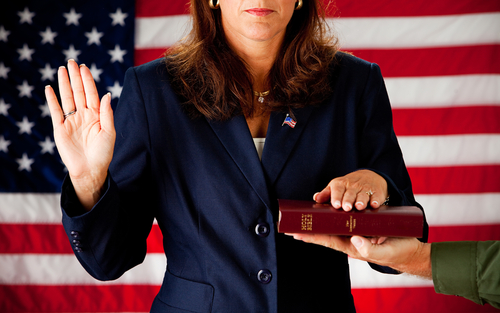 That’s obviously a problem for atheists. It’s also a problem for religious people whose faith prevents them from taking oaths mentioning God.

Senate Bill 1595 is a way to fix that. It puts forth a very simple change, really just adding two words to existing law:

That’s it. In a nutshell, it means witnesses testifying before a House or Senate committee in Oregon no longer have to say “So help me God” if they don’t want to.

Like I said, it’s incredible this wasn’t already in place, and that there are so many hoops to jump through to make the change, but it looks like it’s finally going to happen. It’s about time.

(Image via Shutterstock. Thanks to Dustin for the link)

March 13, 2016
An Inside Look at How Christian Teachers Are Learning to Legally Proselytize in the Classroom
Next Post

March 13, 2016 Louisiana Sheriff's Office Promotes Giant Cross Following a Flood (That Their God Failed to Stop)
Browse Our Archives
What Are Your Thoughts?leave a comment