Last night, Neil deGrasse Tyson — King of Nerds, Defender of Science, First of His Name — surprised a lot of his fans when he tweeted out what appeared to be a sort-of defense of Donald Trump.

It came a day after Trump canceled a rally in Chicago after thousands of protesters came out in a show of solidarity against him. 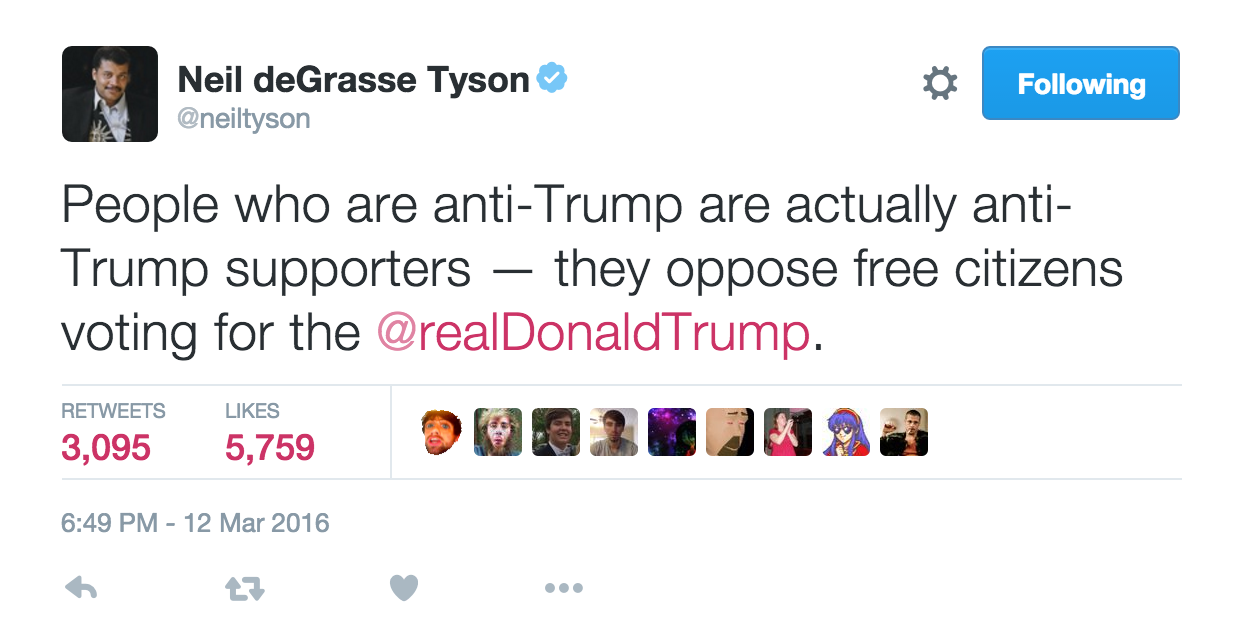 People who are anti-Trump are actually anti-Trump supporters — they oppose free citizens voting for the @realDonaldTrump.

To put that another way, if you’re against Trump, you’re really against his supporters… and democracy and the ability for people to choose their next President. Which, at least to me, is a slam on the protesters who pressured Trump into canceling his Chicago event (which some people wrongly deemed a violation of his “free speech”).

If that’s the case, Tyson misunderstands what the protesters were trying to do.

And they’re trying to do it before it’s too late. The media hasn’t stopped Trump from lying. The Republican Party hasn’t stopped him from dragging them even further into irrationality. The Democrats haven’t spent much time on him, period. So it’s up to the protesters — the people who are anti-Trump and everything he stands for — to show that they’ve had enough.

We’re used to seeing those critics in small doses. A vocal opponent here. A few Black Lives Matter activists there. But now they’re starting to come out in full force.

Trump has spent his entire life surrounded by people who tell him yes. Even at his rallies, he can get people to cheer at anything. The more offensive, the louder they get. But what’s he going to do when he’s in front of thousands of people who have no plans to stick to his script, who make for equally compelling television, and who loudly condemn the “wall” and the “registry” and the insults and the petty attacks?

For the first time, Trump seems unable to control the narrative. His bubble is popping. He can spin his way out of a debate question and the moderators will just move on, but he can’t pretend that his opposition — whom he blames for ruining the country — is limited to a couple of people at each rally.

He can’t arrest thousands of critics no matter how much he wants to. He can’t “ruin the rest of their lives” on a whim.

So, no, Neil deGrasse Tyson. No one’s stopping anyone from voting for Trump. But those supporters deserve to know why they shouldn’t go through with it.

And there are a hell of a lot of people willing to explain why.

March 13, 2016
The Bishop Who Arranged Pope Francis' Meeting with Kim Davis No Longer Has a Job
Next Post

March 13, 2016 An Inside Look at How Christian Teachers Are Learning to Legally Proselytize in the Classroom
Browse Our Archives
What Are Your Thoughts?leave a comment