If Texas Attorney General Ken Paxton could eliminate the Establishment Clause, he’d do it. That’s how little he cares about church/state separation.

The most clear evidence of this became clear last summer during the Kim Davis debacle. Paxton gave county clerks in Texas a green light to discriminate against gay couples, adding that “numerous lawyers stand ready to assist clerks defending their religious beliefs.”

So when Paxton had to appoint a new First Assistant Attorney General because the last one ran off to run a Ted Cruz Super-PAC, you know we should be worried. And Paxton didn’t disappoint: 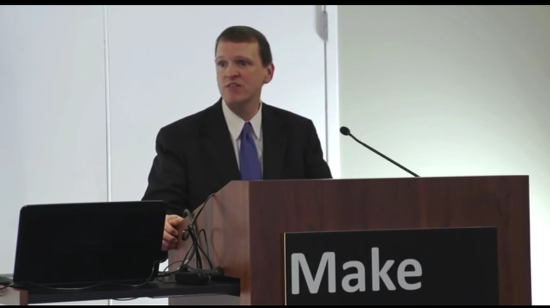 “The addition of Jeff Mateer as First Assistant Attorney General will have immediate impact on the agency with positive long-term effects that will strengthen our work for Texas for generations,” stated Ken Paxton. “Jeff brings a wealth of real-world experience as a seasoned trial and appellate attorney with broad and varied litigation experience spanning over 25 years of legal practice.”

The Texas Freedom Network explained why this is so troubling:

Speaking at a conference at the University of St. Thomas in Houston in 2013, Mateer discussed what he tells students about religious freedom:

“I’ll hold up my hundred-dollar bill and say, ‘for the first student who can cite me the provision in the Constitution that guarantees the separation of church and state verbatim, I’ll give this hundred dollar bill. … It’s not there. … The protections of the First Amendment protect us from government, not to cause government to persecute us because of our religious beliefs.”

Great. This guy just got a job to uphold the Constitution and he failed First Amendment class.

Church/state separation is not a liberal conspiracy, no matter what the Christian Right would have you believe. Maybe Mateer’s appointment would be more distressing if the other Republicans in top-level government positions didn’t feel the exact same way, but it’s disturbing nonetheless.

“Cynical politicians across the country are using ‘religious freedom’ as a talking point in their efforts to allow businesses and individuals, even government officials, to fire or deny services to people who offend their religious beliefs,” Miller said. “Allowing the use of religion as a weapon to harm others is a radical redefinition of the concept of religious liberty. Today that weapon is aimed at laws that protect gay and transgender people from discrimination. But Mr. Mateer’s arguments would open the door to allowing the use of religion to ignore virtually any law that everyone else must obey.”

Texas just got a little Texier.

March 12, 2016
Sadly, the Church of Scientology Has Not Yet Lost Its Tax Exempt Status
Next Post

March 12, 2016 Ray Comfort's Writing a Book About How an Atheist Will Never Become President of the United States
Browse Our Archives
What Are Your Thoughts?leave a comment