Ever since Glenn Beck endorsed Ted Cruz back in January, his reasons for why we should vote for Cruz have been getting increasingly weird. There was the suggestion that God offed Justice Scalia to impress upon Republicans how important it was to elect Cruz Savior-in-Chief. There was also the very public (and very pointless) fast to bring Cruz victory. Spoiler alert: It failed. Miserably.

The odd justifications aren’t going away. On Beck’s show the other day, for instance, he dropped hints that Hell awaited Donald Trump and Hillary Clinton voters. 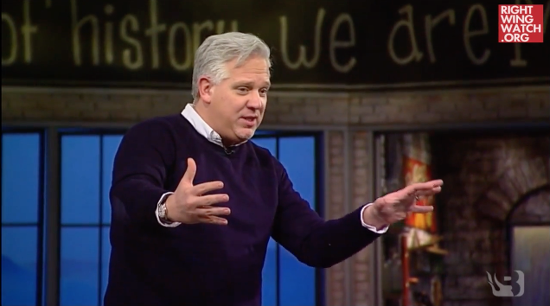 Explaining that God inspired men to write the Constitution and Declaration of Independence, and granted the rights established therein, Beck argued that there’s hell to pay by voting for Clinton or Trump. Literally, hell to pay:

And if we are the generation that loses those rights, we’re going to pay a heavy price. A very heavy eternal price. Because we were the ones that said I know the republic is at stake, I know that we’re in trouble, and I’m not going to face my maker — and this is why I’m out on the road all the time — I’m not going to face my maker if I drop dead, and have him go, “By the way, remember those crazy rights? You were alive then, weren’t you? What did you do? Who did you vote for?”

To be honest, Beck’s description of the current political landscape paints God more like a TV mobster who dabbles in politics than an all-powerful deity.

Last episode, the Big Guy put out a divine hit on Scalia. This time, His people are dropping thinly veiled threats for those not voting for Cruz.

But while the show’s entertaining in its own way, I’m afraid it jumped the shark a long time ago.

March 13, 2016 Let's Hope the Bible Isn't the Only Source of Your Morality
Browse Our Archives
What Are Your Thoughts?leave a comment