The Putnam County Board of Education in West Virginia will have two open seats in the upcoming election, and three of the candidates vying for those spots participated in a forum last night for the editors of the Gazette-Mail.

For some reason, the topic of evolution vs. Creationism came up. And none of the three men — Bruce Knell, Sam Sentelle (incumbent), and Jack Coyner (incumbent) — took a firm stand on the side of science: 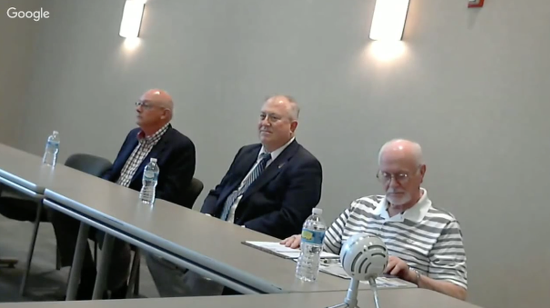 Bruce Knell, who has 40 years of teaching experience, believes creationism should be taught in Putnam County Schools just as Charles Darwin’s theory of evolution is taught.

“I think we can’t single one position,” Knell said. “If we’re going to teach one, we should teach all theories.”

Great! I can’t wait for the year-long course on the Flying Spaghetti Monster, the Cosmic Egg, and every other wacky idea that has no basis in reality.

Sentelle, who is currently president of the West Virginia School Board Association, said that both theories are just that — theories — and should be taught as such.

“I don’t think we should be teaching creationism or evolution as a fact,” Sentelle said.

You’re not supposed to teach evolution as a fact. It’s a theory that is backed up by all the evidence available to us.

And Creationism may be a theory, but it’s not a credible scientific theory, which is why it doesn’t belong in public schools. It doesn’t provide any testable claims. No evidence backs it up. It’s a myth, pure and simple.

Coyner, who has served on the board three times with Sentelle, took a more neutral stance on the topic. He said he teaches whatever is in the textbooks provided to him.

That’s… not very inspiring. Evolution shouldn’t be taught just because it’s in a textbook. It should be taught because it’s the best explanation we have for how the world came to be.

The newspaper called his position neutral. It would be more appropriately described as cowardly.

What sort of teacher thinks, “I’m teaching you this only because I have to. But if we get different textbooks, the material’s gonna change”? Only the bad ones.

The same school board, in 2014, rejected adoption of the Common Core math standards, choosing instead to stick with the “old” ways. In other words, they said no to higher standards that create stronger math students.

This is a district that has a “shortage of science and math teachers.” And no wonder. No educated person would choose to work in a District run by people who have so little respect for science and math.

The election takes place on May 10.

Is it possible not to elect any of these fools?

March 11, 2016
Tennessee School Board May Block All After-School Clubs to Stop Gay-Straight Alliance from Meeting
Next Post

March 11, 2016 Christian "Prophet" Fights Lion Because He Thinks God Will Save Him; Lion Bites His Ass Off
Browse Our Archives
What Are Your Thoughts?leave a comment