If you ever wonder why it’s legal for public high schools to have Bible clubs, the answer is simple: The Equal Access Act.

Simply put, if a school allows the formation of any extra-curricular club (Chess club, Drama club, etc.), then officials can’t discriminate against a religious club, or a Secular Student Alliance, or a Young Republicans group.

That’s why the controversy over a Gay-Straight Alliance at Franklin County High School in Tennessee is so strange.

As soon as the group was announced, Christians began complaining about it, doing everything they could to gin up resentment against it. One man even said that a pro-ISIS club wouldn’t be far behind: 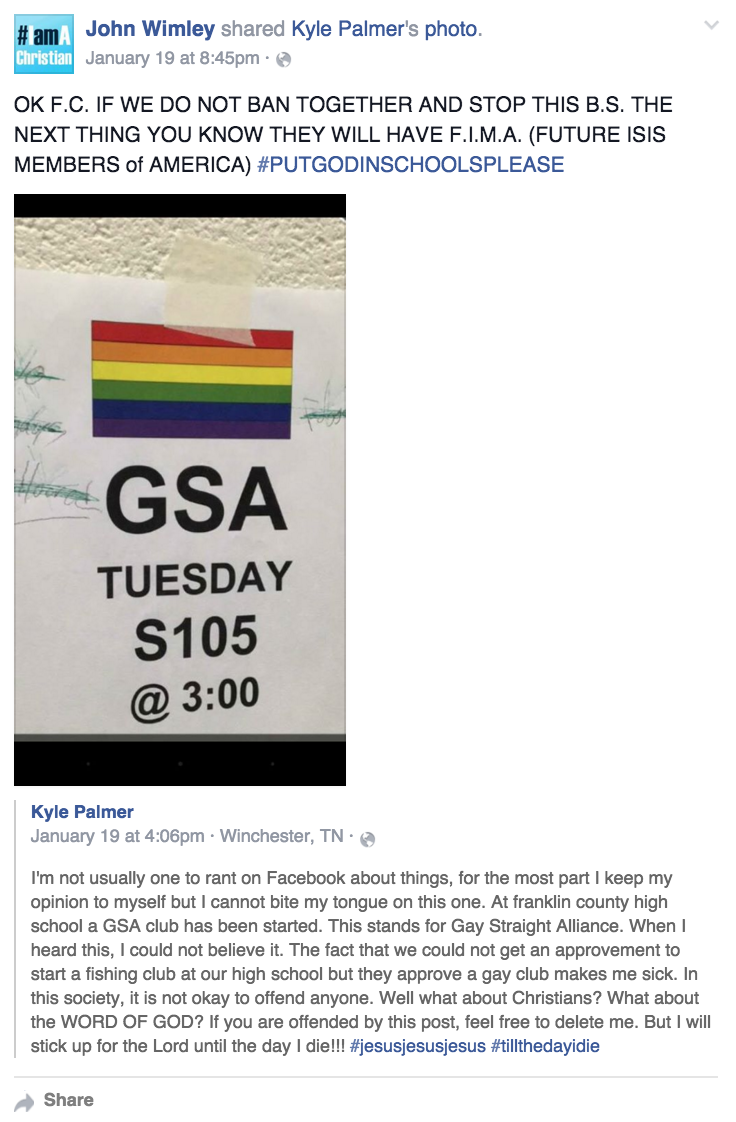 That was nearly a month ago and things haven’t gotten any better.

In fact, during a school board meeting this week, members considered the nuclear option:

After rumors began circulating online Tuesday morning, board Chairman Kevin Caroland confirmed that eliminating all extracurricular clubs was among the possibilities discussed during a work session on Monday night.

“We discussed last night our policies and procedures and the possibility of getting rid of all clubs, and what all that would entail. There was not a consensus. that I could tell,” Caroland told The New Civil Rights Movement in an exclusive interview. “We had a large number of emails that have asked us to look at that.”

To repeat, the board is at least considering getting rid of every after-school club just to put the GSA out of business.

Talk about cutting off your nose to spite your face…

I don’t think the Christians who like this idea realize that they would be blocking, say, the formation of a Fellowship of Christian Athletes group just to make sure gay students remain a little more ostracized.

It would be incredibly stupid to do that. High school should be a place where students pursue their interests and have serious discussions about important topics. You don’t always get to do that in the classroom.

Caroland said this wasn’t a realistic option, but bigotry knows no bounds. When the board meets again next week, let’s hope there are plenty of GSA supporters to crowd out the faith-based hate.

March 11, 2016
Christian Purity Site: Girls Who Dress Immodestly Reduce Their Own "Value and Respect"
Next Post