We already know that Ted Cruz has tasked himself with channeling the body of Christ and the face of God.

Since his entire demeanor is “revivalist preacher,” this isn’t all that surprising. But you know what? Don’t count out Donald Trump just yet. You see, he’s a tough guy. Maybe a tough guy who uses “salty language”… but you who can use that? Jesus. Jesus loves tough guys. In fact, Jesus surrounded himself with the Donald Trumps of his era.

At least, that’s the conclusion televangelist Rick Joyner came to while discussing Trump on The Jim Bakker Show: 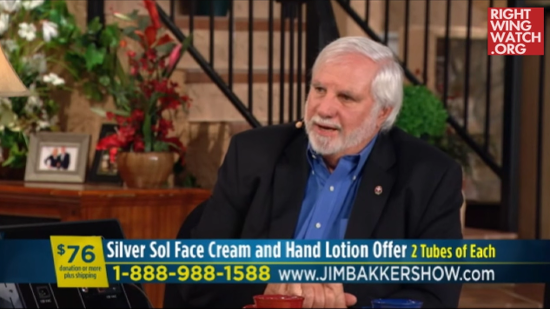 You look at the type of leaders that Jesus chose, they were more like Donald Trumps. And think of how he treated him. We think of Jesus as just this big teddy bear, think of this, these are some of the toughest guys you could find. He puts them together — they hate each other when he calls them — puts them together, lives with them for three-and-a-half years and after three-and-a-half years of living with Jesus, the night before he’s crucified, they’re afraid to ask him a question. ‘John, you ask him. He called me Satan, he won’t call you Satan.’ Think about it. Jesus was a tough character. These are tough guys and they’re intimidated by him after three-and-a-half years of living with him.

It’s not particularly surprising that Joyner has such a high opinion of Trump, seeing as how he previously speculated that God may be planning to grant Trump the “grace” he needs to “fix the mess we’re in now.” Why would Trump earn “the favor of God”? Well, “God gives His grace to the humble.” And “Donald Trump may be one of the most humble of the candidates.”

Meanwhile, what’s Joyner’s opinion of the guy who makes healing the sick and caring for the poor a cornerstone of his campaign? Yeah, Bernie Sanders is only popular because the Communist party in our schools have “taught socialism” to the kids.

March 11, 2016
Christian "Prophet" Fights Lion Because He Thinks God Will Save Him; Lion Bites His Ass Off
Next Post

March 11, 2016 Who Are These Students Not Participating in a Massive, Adult-Led Cafeteria Prayer?
Browse Our Archives
What Are Your Thoughts?leave a comment