In a political season that’s defied every expectation, one of the questions I still can’t quite wrap my head around is why evangelicals — who for so long have pushed the conservative line on social issues — are supporting someone like Donald Trump. Trump doesn’t have an anti-gay background (though he’s playing the part now), he praises Planned Parenthood (while condemning abortions), he says he doesn’t ask for forgiveness, he clearly doesn’t know the Bible, etc.

But evangelicals like the guy in significant numbers. 34% of them supported Trump in South Carolina, 28% felt the same in New Hampshire, and 22% agreed in Iowa. 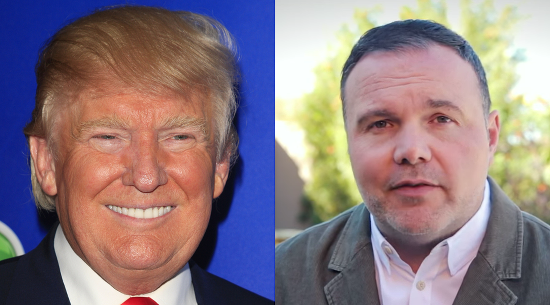 Driscoll, of course, is the guy who wasted his church’s money to cheat his way onto the New York Times best sellers list, treats women like shit, and has a reputation as a bully.

On paper, evangelicals should want nothing to do with this asshole. But Mars Hill Church had a weekly audience in the tens of thousands, and Driscoll has already announced plans to start up a new church in Phoenix, Arizona.

Best to consider Trump and Driscoll’s seemingly paradoxical ascendance in popularity among U.S. evangelicals not as anomaly but as trend — one that signals the tenuousness of ideology or theology as moral guides. When the successful branding of authenticity is achieved by performing shamelessness, such that overt affective responses do not register as fear or anger, but as laughter, it’s time to take humor’s capacity to collectively move and politically mobilize audiences much more seriously. The laughter elicited among audiences during Trump and Driscoll’s performances garner more political pull and spiritual authority than appeals to either virtue or morality. Trump and Driscoll do not simply capitalize on people’s fears or insecurities; they also excite, agitate, and exploit a desire to believe.

To put it another way, they appeal to your gut, your baser instincts. Yes, they’re assholes, but they’re your assholes. If the “other side” used the same kind of rhetoric and bombast, Christians would treat them with the contempt they’d deserve. But because Driscoll and Trump claim to represent them, it’s all okay.

A lot of people have said Trump is the natural result of a political party that championed the know-nothingness of George W. Bush, the perpetual persecution complex of Sarah Palin, and the anti-Obama rhetoric of its other leaders.

In many ways, Mark Driscoll is what happens when an entire faith treats women as second class citizens, allows LGBT people to be bullied in the name of Christ, and treats science as a four-letter word.

But the rest of us deserve much better.

March 10, 2016
A Florida Mayor May Be Removed from Office After Satanist Points Out Numerous Ethical Violations
Next Post