For the past few weeks, “Nanny” Melissa Strzala has been posting videos explaining Common Core methods for doing math… and, not surprisingly, she has no clue what she’s complaining about.

The most popular video, with more than 4,000,000 views on Facebook as of this writing, involves subtraction: 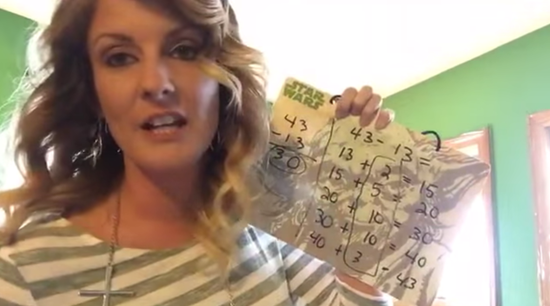 Let’s talk about the problem she just did.

The method on the left — the algorithm most of us learned in school — would work just fine for a problem like the one she’s doing. That’s partly because all the numbers on the top row are the same or larger than all the numbers on the bottom row. That makes the subtraction really easy. You don’t have to “borrow 10” from another number. Hell, you can just do it in your head in a split second.

The method on the right — the one Strzala appears to be mocking — would be better illustrated with a different problem.

So let’s use this one: 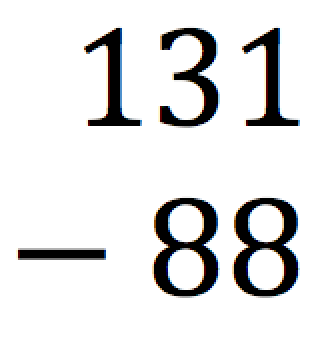 Sure, you can solve this using the “old” way, but it’s going to be really annoying.

The smarter way to think about it would be this:

Get it? You just start with the lower number, you keep adding to it until you reach a “nicer” number, and you eventually combine everything you added. That’s the way a lot of us learn to do it intuitively.

The reason the method is misleading in this video is because Strzala’s “nice” numbers include 15, 20, 30, 40, and 43. That’s *way* too many for such a basic problem. If students are taught the method this way, no wonder they’re confused.

But the issue here isn’t the “new” method itself. It’s just that it’s the wrong tool to use to solve this particular problem. Again, even I would have preferred the “old” method (if mental math wasn’t an option).

The funny thing is that several of her other videos actually do a decent job of explaining various math techniques. This one in particular does a fine job of showing why expanding numbers makes multiplication much easier to understand.

But on her social media, Strzala makes clear that she’s a conservative who wants to do away with Common Core. Even if she’s genuinely making these videos to help parents understand their kids’ math homework, she has no problem being known as someone who “exposes” the Common Core Conspiracy.

Here’s a suggestion for her: Make a video explaining what Common Core is. Just for math. Because I guarantee that she has no idea what it entails.

People like her who complain about this topic think they’re protecting children from government intrusion and waste-of-time skills. The reality is that if the standards are implemented correctly, students will actually be better equipped to succeed in their math classes moving forward. Mental math will come more easily to them, and they’ll have more ways to attack problems instead of relying on the same, slow, inefficient methods that some people never master in the first place.

But given that conservatives have waged wars against Science, History, and English, I guess we shouldn’t be surprised that Math is next in line.

To paraphrase Stephen Colbert, numbers have a well-known liberal bias.

March 10, 2016 A Florida Mayor May Be Removed from Office After Satanist Points Out Numerous Ethical Violations
Browse Our Archives
What Are Your Thoughts?leave a comment