One Christian father seems to have taken parenting to extraordinary (and creepy) new heights in his efforts to see his daughter hitched.

Placing an ad (without his daughter’s knowledge or permission) in Christianity Today magazine, Stephen Stewart advertised a job listing for “son-in-law”: 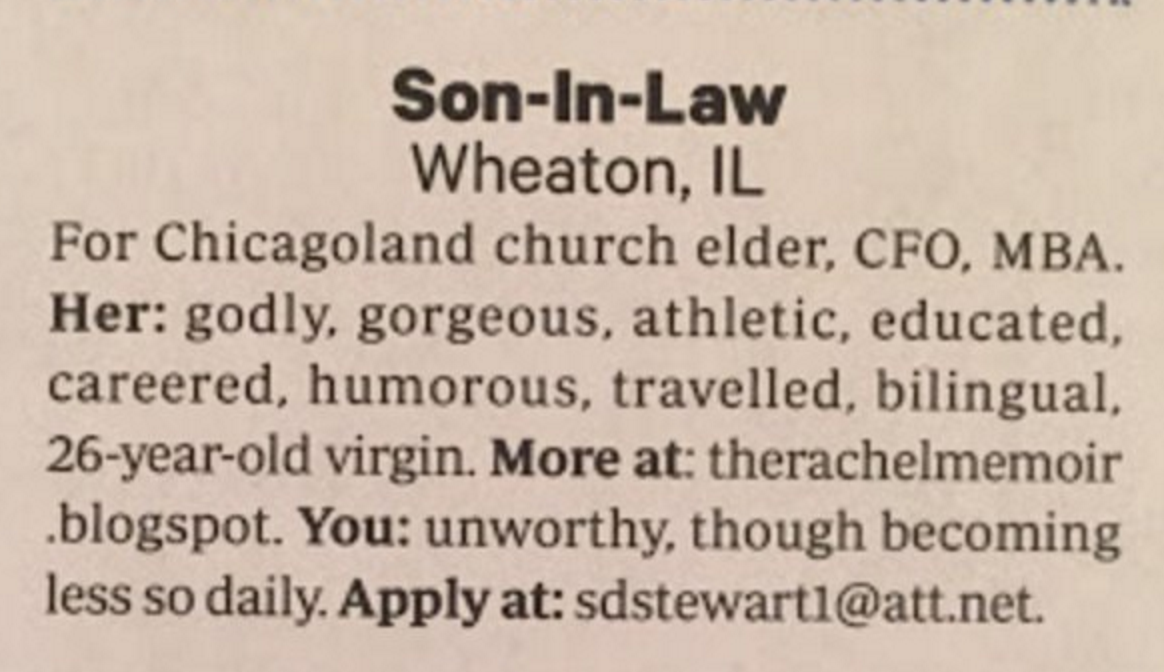 Somehow, this creepiness got past Christianity Today’s editors and made it into the magazine. To their credit, though, when people objected, the magazine’s Editor-in-Chief Mark Galli offered the following statement:

CT would like to apologize to readers for an ad that appeared in our March issue pic.twitter.com/0Hrpt9puvn

We at Christianity Today apologize for publishing a personal ad in our Marketplace section that has seen rightly seen as demeaning and in poor taste. We want everything in our magazine to reflect beautiful orthodoxy, and this ad did not. We have taken a hard look at our ad review process, made some changes, and we can assure our readers that no ad like this will appear again.

That’s a decent response from a publication that believes committed gay and lesbian couples are “destructive to society.”

Rachel, the object of this overabundance of paternal interest, writing in a since-deleted blogpost , seems to have taken the whole thing in good humor:

So how did I find out about this?

Well, some sympathetic women tipped me off in the comments section of my blog post.

So naturally I called my dad at work and asked if he knew anything about a personal ad in the leading evangelical magazine envisioned by Billy Graham. His response was revelatory, “One second. Let me close my door.” Then came his unapologetic admonition about the entire thing that concluded with him reading it to me. Impressed, but not surprised, I laughed and then hung up. It wasn’t a minute later that I received a text from my mom saying, “I hear the cat is out of the hat.” Her Puerto Rican version of the expression was the perfect gesture to remind me why I love my parents.

So how am I feeling about this?

I’m not angry or embarrassed.

I’m just nervous if this doesn’t work out, next I’ll find my face plastered on a billboard.

Probably because of the attention the advertisement is receiving, the entire blog seems to have been taken down (visiting it brings up the message, “Sorry, the blog at therachelmemoir.blogspot.com has been removed. This address is not available for new blogs”). However, Google’s cached site history shows activity all the way back to 2013, so this is either a very well-planned prank that’s been in the works for years (move over Joaquin Phoenix) or a genuinely creepy move on Mr. Stewart’s part.

And considering what a disturbing degree of focus some Christians put on maintaining a girl or woman’s virginity (purity balls, anyone?), the advertisement isn’t even that surprising.

Which is maybe the worst part of all.

March 10, 2016
The Dress Code for Good Christian Women
Next Post