Leave it to Creationist Ken Ham to find something to complain about when a church is feeding homeless youth. 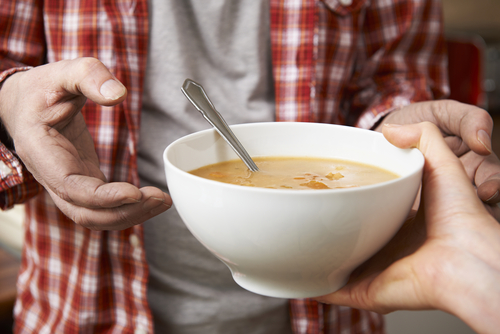 His complaint revolves around a church with a unique mission, as reported by NPR:

Some churches have become inclusive of gays and lesbians, but for transgender people, church can still feel extremely unwelcoming. A congregation in Phoenix is working to change that by focusing on the everyday needs of its members — many of whom are homeless trans youth.

It starts with a free dinner every Sunday night with donated homemade and store-bought dishes.

“There’s no shame. There’s no judgment. It’s here to help. We’re about health and wholeness,” says the founding pastor, Jeffrey Dirrim, as he points to countless toilet paper rolls on the table for anyone to take. It was toilet paper week. “And you need toilet paper, we’ve got toilet paper.”

The congregation, called Rebel and Divine, has a mission: To reach at-risk youth. It grew out of a Christmas shoe drive years ago and it now serves about 200 attendees a month under the umbrella of the United Church of Christ. The attendees are people in their midteens and mid-20s, gay and lesbian kids, homeless kids, and especially transgender kids — people often unwelcome at other congregations.

Considering Christians follow someone who is said to have fed the hungry, healed the sick, and protected those accused of sin, this seems like pretty Christ-like behavior.

But not to Ken Ham.

While he admits some churches go too far in demonizing gay people, he makes it very clear that not judging LGBT people is much worse:

… the other tendency that we’re seeing more and more frequently is the total acceptance of homosexual and transgender behavior. Instead of recognizing sin for what it is, many Christians and churches, in the name of tolerance and love, openly embrace the LGBT community without ever exposing their sin and pointing them toward the one who forgives all sin — Jesus Christ. This is a compromise on Scripture’s clear teachings about marriage and gender…

… reaching out to others by meeting their physical needs is important and admirable. But as a Christian or a church, what is the point of meeting physical needs while ignoring the ever more important spiritual needs of every person? People need food, water, toiletries, a roof over their heads — but how much more do they need Christ?

It’s a bizarre worldview that says feeding hungry kids is good… but not nearly as good as preaching at them. Those kids may need food, says Ham, but it’s more important that they be told they’re going to hell.

Don’t worry, though. Ham insists that Christians saying it “lovingly,” so that makes it okay.

As Christians, we need to stand solidly on the authority of God’s Word. We need to offer aid to those in need — but we need to do so in the name of Christ. We need to gently and lovingly call sin what it is, while never neglecting to direct people to the grace and love of Jesus Christ. It’s the gospel that changes hearts and lives for now and eternity.

True love is to tell people the truth about sin, God’s righteous judgment, and God’s mercy and free gift of salvation.

It’s admirable to assist homeless kids… but true love? That’s reminding them that they belong in hell, and that the only way out is to deny who they really are, hide their true selves in self-doubt and shame, and spend the rest of their lives devoted to the God who will let them be tortured forever if they don’t.

The soup can wait, I guess.