When your ideological opponent mischaracterizes your beliefs in an attempt to trash you, you know their criticism isn’t worth listening to. But what else would you expect from the bigots who keep saying people choose to be gay? 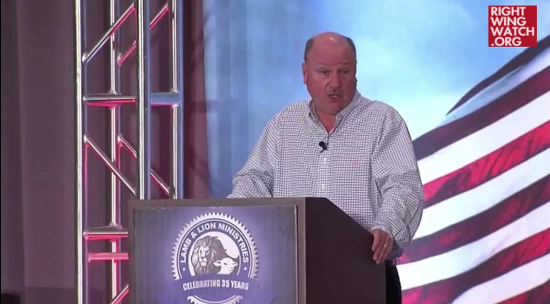 Fundamentally, at its core, Secular Humanism, if that’s what you want to call it — politically, it’s called progressivism — but it’s the idea that man is God…

Secular Humanism began to become front and center in our culture and it took the place… of the Judeo-Christian worldview.

The Judeo-Christian values system that our country was built on is being replaced by Secular Humanism, which is of Satan.

If “man is God,” then Satan has no role in that whatsoever. More importantly, though, Christians still run the show.

When Democrats in Missouri have to filibuster for 39 straight hours just so conservative Christians can’t legislate their bigotry, and it still fails, you know Christians have all the power.

If progressives are winning, it’s only in the direction of more inclusion and choice. Our victories don’t require Christian losses.

But that won’t stop people like Wildmon from whipping up his Persecution Complex and pretending that Christians are being pushed to the bottom of a ladder that exists only in his mind.