Cruz praised his new co-chairs for “fighting for our values.”

“Values” that apparently include making it a crime to be gay. 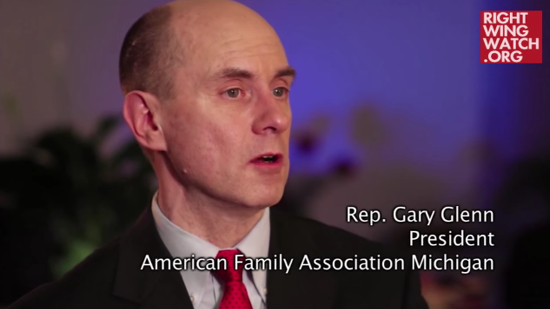 During a 2011 interview, Glenn, who also serves as the president of the American Family Association of Michigan, was asked if he supported criminalizing homosexuality. “The short answer to your question is yes, we believe that states should be free to regulate and prohibit behavior that’s a violation of community standards and a proven threat to public health and safety — including, as most of the United States did throughout its history, homosexual behavior,” he said.

That’s not the end of his “family values,” though. Among his other efforts? Protecting legalized discrimination against LGBT people.

We respectfully urge you not to even consider adopting such a discriminatory and volatile proposal which is clearly a solution in search of a non-existent problem, intended only to advance homosexual activists’ drive to have homosexual behavior and cross-dressing defined by law and endorsed by city government as the moral, social, and legal equivalents of immutable characteristics such as race, ethnic background, and sex.

Glenn also believes just teaching kids about homosexuality should be grounds for financial, if not criminal, liabilities to school personnel. As he explained in last year’s anti-gay “documentary” Light Wins:

If some young person hears at school it’s okay to be gay and then comes down with a fatal disease as a result, school officials should be held legally liable, individually and in their official capacities, financially and maybe even criminal.

Now, this seems wildly at odds with the idea of liberty and small government, much less courage or values. Not that Ted Cruz welcoming this kind of anti-LGBT bigotry and downright paranoia into his campaign will make much difference to conservative voters. Even if it bothers them, they’ll no doubt find a way to rationalize it away. Just ask Caitlyn Jenner.

March 8, 2016
Oklahoma Will Let Voters Decide Whether or Not to Bring Back Illegal Ten Commandments Monument
Next Post