Kiva Atheists Have Now Loaned Out an Astonishing $25,000,000 on the Microlending Website March 8, 2016 Hemant Mehta

Kiva Atheists Have Now Loaned Out an Astonishing $25,000,000 on the Microlending Website

Longtime readers of this site know that the Atheists, Agnostics, Skeptics, Freethinkers, Secular Humanists and the Non-Religious group on microlending website Kiva is among the most popular on the site. We have loaned out more money than any other group and given out the most loans total. (The Kiva Christians come in second in both categories.)

But the atheists deserve another round of applause today because they just surpassed an astonishing $25 million in total loans made: 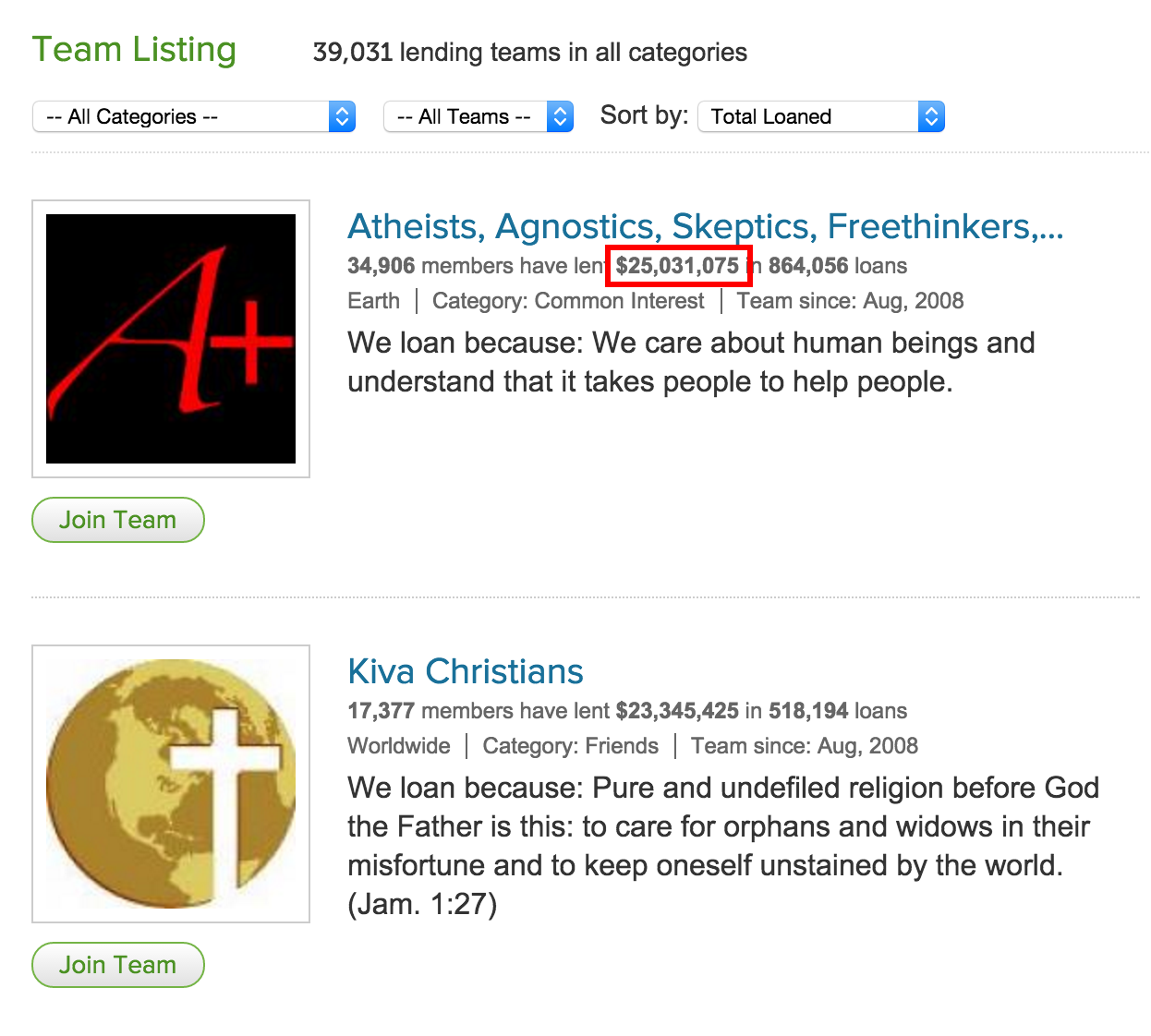 In a press release put out by the A+ group (which is the shorthand they use for the full name), they celebrated the achievement:

“A+ Team members are concerned, compassionate and generous,” says Nancy Somers, co-captain of the 35,000 member team.” We enjoy helping others without any expectation of a future reward.”

A+ Team micro-loans support diverse small business owners who don’t have access or enough credit to receive traditional loans from banks. Many loans focus on agriculture, food and retail in places like the Philippines, Peru and Kenya. A+ Team members have contributed to nearly half of the more than one million loans funded through Kiva.

“The A+ Team has had an astonishing impact on Kiva. The amount of money they’ve collectively lent is staggering. Their loans span the entire breadth of Kiva’s work,” says Chelsa Bocci, Kiva’s VP of Marketing & Community.

It’s a remarkable achievement that offers clear evidence that atheists are just as charitable as any religious group out there; we just lack the infrastructure a lot of churches have for giving to others. When the opportunity to give is provided for us, though, we’re more than willing to pitch in as we can.

If you haven’t joined the group, now would be a great time to do so. Just use the link here.

(Thanks to Scott for the link. Portions of this article were posted earlier)

March 8, 2016
In Idaho, An Outdated Law Mandating Bible Reading Will Be Replaced by a Law That's Equally Useless
Next Post

March 8, 2016 Jury Says Two Towns, Overrun by Radical Mormons, Discriminated Against People Outside the Faith
Browse Our Archives
What Are Your Thoughts?leave a comment