The Pointless Questions About God at the Democratic Debate Were Handled Well by Both Candidates March 7, 2016 Hemant Mehta

Last night, in a debate filled with questions about important policy issues, one questioner managed to throw in a couple of meaningless questions about God, basically asking both candidates to pander to her.

But I thought Bernie Sanders answered the question as well as anyone could have in his position. 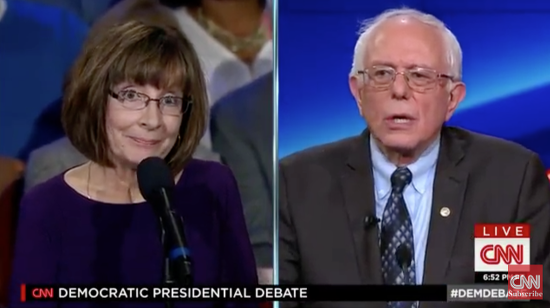 QUESTIONER: Senator Sanders, do you believe that God is relevant, why or why not?

SANDERS: Well, I think — well, the answer is yes, and I think when we talk about God whether it is Christianity, or Judaism, or Islam, or Buddhism, what we are talking about is what all religions hold dear. And, that is to do unto others as you would like them to do unto you.

First of all, that’s just a weird question.

Of course God is relevant. God’s relevant to a lot of people. Belief in God has a direct impact on how people vote and what policies govern our nation. You don’t have to believe in God to take the idea of God seriously.

(Did anyone really think Sanders would say no? Even if he were an atheist, it would have been stupid to suggest God’s not relevant.)

Sanders’ answer, then, was brilliant. He was able to offer the obvious “Yes” before pivoting to the Golden Rule, which is really his form of religion.

He went on to say that he was running for President because he believed “morally and ethically we do not have a right to turn our backs on children in Flint, Michigan who are being poisoned, or veterans who are sleeping out on the street.”

Again: He didn’t say he was pushed by God to run, like many of the Republicans have done. He used the question as a starting point to reflect on his own humanistic philosophy.

If I were running Sanders’ debate practice sessions, I would have told him to do exactly that.

The same questioner then asked Hillary Clinton: “To whom and for whom do you pray?”

Again, that’s a question that belongs at a Republican debate where substance is meaningless and everyone’s just trying to score cheap points. But Clinton, who knows how to pander as well as any politician, did the same sort of pivot as Sanders. She mentioned prayer at first, but it soon turned into a response about humility and wishing the best for others:

… I do pray for people in authority. I try to think about what they are going through, even when I disagree with them. Trying to find some common ground, some common understanding that perhaps can make me more empathetic. I don’t always succeed. I will tell you that.

So I pray on a pretty regular basis during the day, because I need that strength and I need that support. And especially when you are in the position that I’m in and that Senator Sanders is in, where you are asking people to vote for you, to give you the most important job, not only in our country, but I would argue in the world.

I think humility is one of the most important attributes that you bring to both that seeking and then if you’re fortunate enough, to that holding of office and that’s what I will try to do.

It would have been foolish to say, “I don’t pray.” Even if she preferred speaking with trusted advisors and experts over an imaginary deity, that’s not the answer she should have given. The headlines would have been brutal. And Clinton is known to be religious, so how else was she going to respond?

Given the nature of the question, I didn’t have a problem with the way either of them responded. Nothing they said suggested that you’re a better person for being religious. Nothing they said implied that prayer was the right answer for everyone and the government. Nothing they said did any damage to their campaigns, and that’s typically the best outcome you can hope for in a contested race.

Sure, I would have loved to see them talk about the importance of church/state separation, and how you don’t need prayer to do a good job in office, but they both answered in a way that’s consistent with their beliefs. They didn’t even alienate atheists — unless you’re offended that they answered the questions at all.

The only fault here rests on Anderson Cooper and CNN for thinking that these questions about God were worth the viewing audience’s time.

***Update***: The Secular Coalition for America issued this statement about the questions:

“In the closing minutes of the Democratic debate, Senator Sanders was asked if he believed God is ‘relevant’ and Secretary Clinton was asked for whom she prays. Neither question served the purpose of the debate which ought to educate voters about substantive differences between the candidate’s platforms. When news outlets use the debate stage as an opportunity to ask about a personal belief in God or prayer, it implies to the audience that these are issues the voters need to know in order to make an informed decision at the ballot box.”

March 7, 2016 Donald Trump Wins "Islamophobe of the Year" Award... but Don't Get Too Excited
Browse Our Archives
What Are Your Thoughts?leave a comment