For the next couple of weeks, the Freedom From Religion Foundation will air TV ads during The Late Show with Stephen Colbert. They feature President John F. Kennedy talking about the importance of church/state separation: 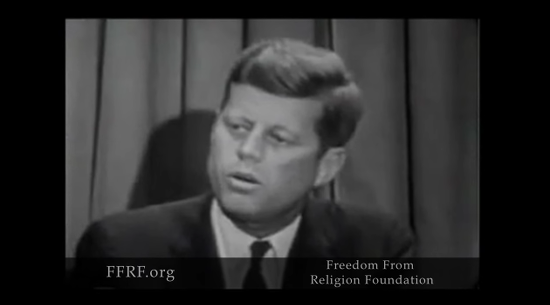 I believe in an America where the separation of church and state is absolute… where no religious body seeks to impose its will directly or indirectly upon the general populace.

While the ad doesn’t endorse any candidate (obviously), it’s part of the group’s “I’m Secular and I Vote” campaign urging people who care about their (non-)religious freedoms to vote for people who feel the same way.

March 5, 2016
Christian Evangelist: Atheists Would Be Cannibals in an Emergency Due to "Survival of the Fittest"
Next Post