The Wearable Bible: Printed on a Silicon Chip, This Good Book Is Intended to Be Used As Jewelry March 4, 2016 Terry Firma

The Wearable Bible: Printed on a Silicon Chip, This Good Book Is Intended to Be Used As Jewelry

I’ve always thought of the Bible as big in global impact but small in moral stature. After all, the tome describes how the Almighty drowns all the Earth’s creatures in a fit of pique; and after the planet is repopulated, He kills all of Egypt’s firstborns, has naughty children torn apart by bears, et cetera. That’s some God, and some “Good Book.”

Now there is a physical copy of the Bible that metaphorically matches the moral size of this preposterous page-turner. 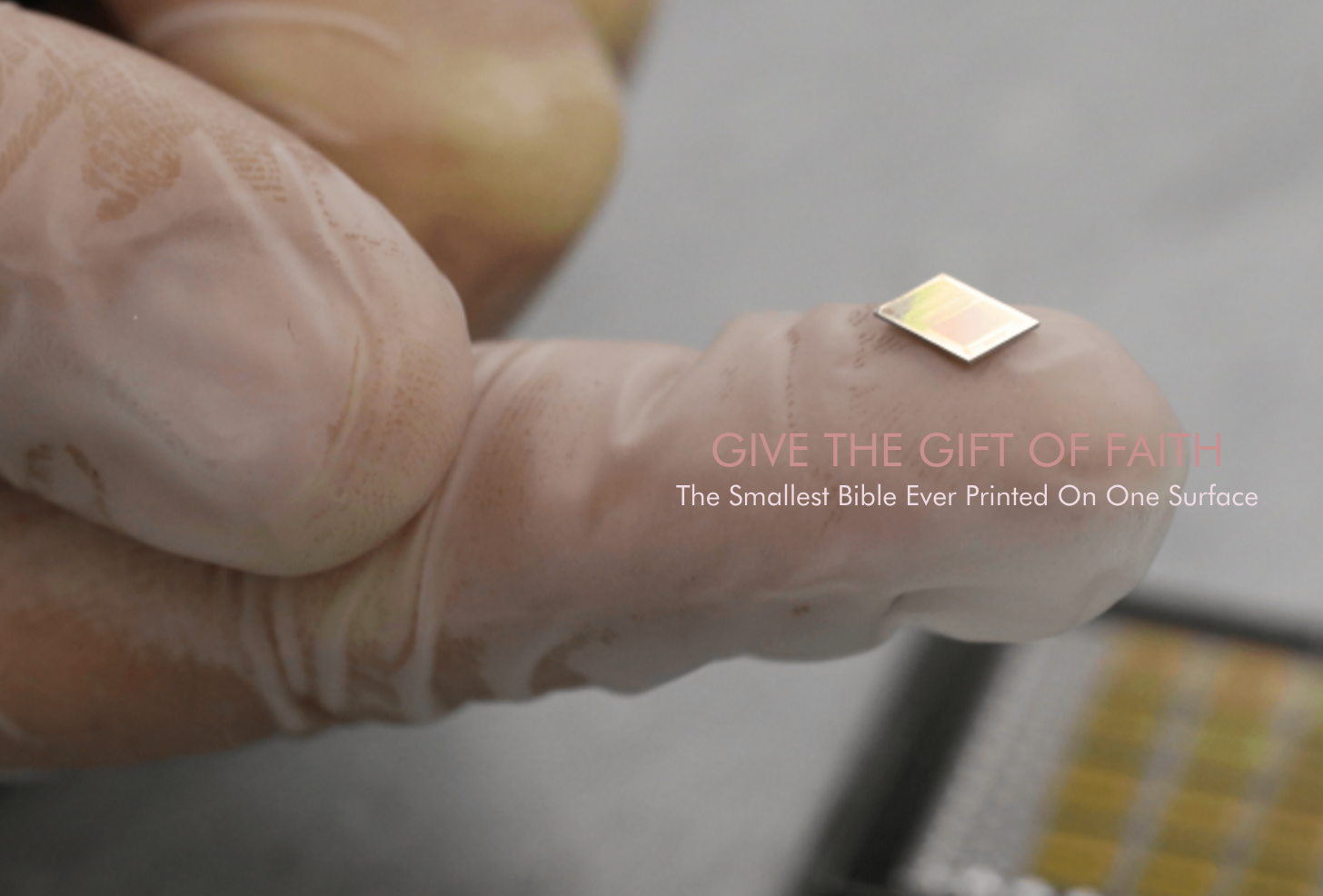 At the website for the Jerusalem Nano Bible, we learn that the founder’s mission is

… to reignite the spiritual dialog about faith through modern technology allowing believers to carry the word of G-d with them wherever they go.

I too carry the word of G-d with me wherever I go, as I’ve long had the Skeptics Annotated Bible on my iPhone. But the Nano Bible provides a different kind of miniaturization. It shrinks all of God’s 300,000 words to the size of a 25-square-millimeter sliver of silicon. So now, praise be, you can carry the Holy Book around with you in the form of a necklace or a lapel pin.

Ami Bentov, an Israeli entrepreneur, came up with the idea to mass-produce silicon chips containing the entire Bible and sell them as pieces of religious jewelry. … The company’s goal is to make the wearable Bible affordable and accessible, if not exactly practical.

Bentov, the founder of the Jerusalem Nano Bible, partnered with TowerJazz, a semiconductor company, to create pin-sized nano versions of the Old and New Testaments. The former contains all 24 books of the Hebrew Bible written in the original Hebrew. The latter contains the entire New Testament, written in Greek. An English-language version is under development.

Of course, the project involves relatively cutting-edge science — an interesting contrast to the primitive mutterings being inscribed.

The company transforms a text file of the Bible into an actual image, or photograph, that is projected onto a 5-by-5-millimeter wafer surface covered with a protective layer of silicon. Each letter is 600 nanometers wide. … An unadorned Nano Bible in a box costs $25; lapel pins, $40; and necklaces, including crosses and Stars of David with embedded Nano Bibles, from $90 to $150.

An electron microscope, needed to read the text, is not included, but a lightly used one can be yours for less than $100,000.

Despite RNS’ enthusiastic coverage, Bentov’s Nano Bible isn’t the first time the Good Book was printed on silicon — nor is it the Bible’s smallest iteration. Almost 10 years ago, also in Israel, scientists managed to transfer

… the entire Hebrew text of the Jewish Bible onto a space less than half the size of a grain of sugar. The nanotechnology experts at the Technion institute in Haifa say the text measures less than 0.01 square inch surface [about 6.5 square millimeters]. They chose the Jewish Bible to highlight how vast quantities of information can be stored in minimum amounts of space.

Obviously, I support all efforts to make the Bible smaller still, and hope science will soon render it so tiny as to be mercifully invisible.

March 4, 2016
A Bunch of Atheists Told Me Why They Plan to Vote Republican
Next Post

March 4, 2016 West Virginia Senate Votes Down "Religious Freedom" Bill
Browse Our Archives
What Are Your Thoughts?leave a comment