Yesterday, I posted about how it puzzled me that Michael Shermer, publisher of Skeptic magazine, would support Donald Trump. He seemed to say as much last month during an interview with KCRW, an NPR affiliate in California.

He was introduced as a Trump supporter and said nothing to counter that, and then he gave reasons for why he liked the candidate. It wasn’t quite an endorsement, but that seemed like a distinction without a difference. Other websites certainly ran with it.

But was the characterization accurate? 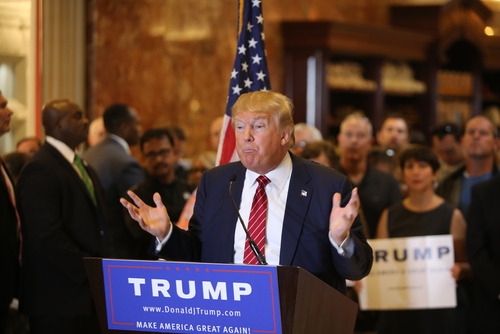 I asked Shermer directly and he rejected it, saying this in an on-the-record email (emphases mine):

My publicist had earlier booked me on that same show on KCRW to talk about social and political issues in conjunction with the paperback edition of my book The Moral Arc.

A few weeks later the producers were looking for someone to say a few positive things about Trump so I agreed to do it because I greatly respect the host, Warren Olney, who strikes me as a rare commodity in the media these days: someone who really tries to be fair and balanced.

At the time I liked some aspects of Trump, particularly his stance on having a strong military but not using it (compared to Bush and Obama who both used it all too often), and his seeming willingness to make deals with Democrats in Congress (the only way to get things done).

I’ve since grown concerned about some of Trump’s other positions, however.

That said, all of the candidates are flawed. Cruz is too religious and untrustworthy, as is Rubio. Kasich seems the most centrist, rational, and practical, but he’s unelectable in the primary, as is Bernie Sanders, who is too far left for me anyway. Even my liberal friends who say they’re voting for Hillary admit she’s got a closet full of bad baggage.

To date I have not decided whom I am voting for, and I am not publicly endorsing anyone (as if anyone would care who I endorse anyway as I’m not actively involved in political commentary). I see Jesse “the body” Ventura may run on the Libertarian ticket. That strikes me as emblematic of what this election season is coming to.

If you want to criticize someone’s beliefs, you should at least be able to describe those beliefs accurately. I thought I was doing that based on snippets from an interview, but it turned out not to be a fair assessment. I’m happy to correct myself. I hope others do the same.

March 4, 2016 A Bunch of Atheists Told Me Why They Plan to Vote Republican
Browse Our Archives
What Are Your Thoughts?leave a comment