Caitlyn Jenner: “I Like Ted Cruz” and Would Like to be His “Trans Ambassador” March 4, 2016 Rachel Ford

In a wide-ranging interview with Advocate’s Dawn Ennis, Caitlyn Jenner turned to politics and made a few eye-popping comments. (Spoiler alert: she’s as conservative as ever). 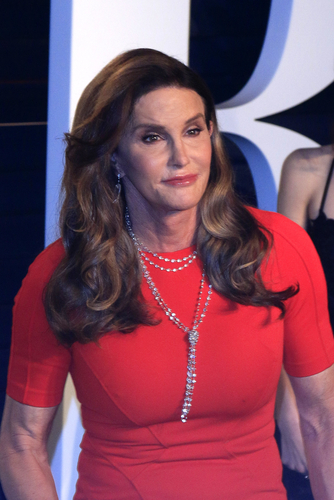 In particular, her comments about Ted Cruz are raising eyebrows; but while she had kind words for him, they weren’t quite as kind as some headlines are making it out to be (more on that in a minute).

In discussing the candidates, she remarked,

“I like Ted Cruz,” she declares. “I think he’s very conservative and a great constitutionalist and a very articulate man. I haven’t endorsed him or anything like that. But I also think, he’s an evangelical Christian, and probably one of the worst ones when it comes to trans issues.”

It’s kind of a strange statement. I mean, I can’t imagine someone saying that about other forms of bigotry. “You know, I love so-and-so. He’s brilliant. But also totally racist.” Or misogynistic. Or anti-Semitic. It’s a pretty crucial “but.”

Still, it’s worth noting that Caitlyn Jenner did not endorse Cruz.

And that’s worth noting because conservatives are claiming she did exactly that. Young Conservatives touted “Bruce ‘Caitlyn’ Jenner endorses Ted Cruz for president”: 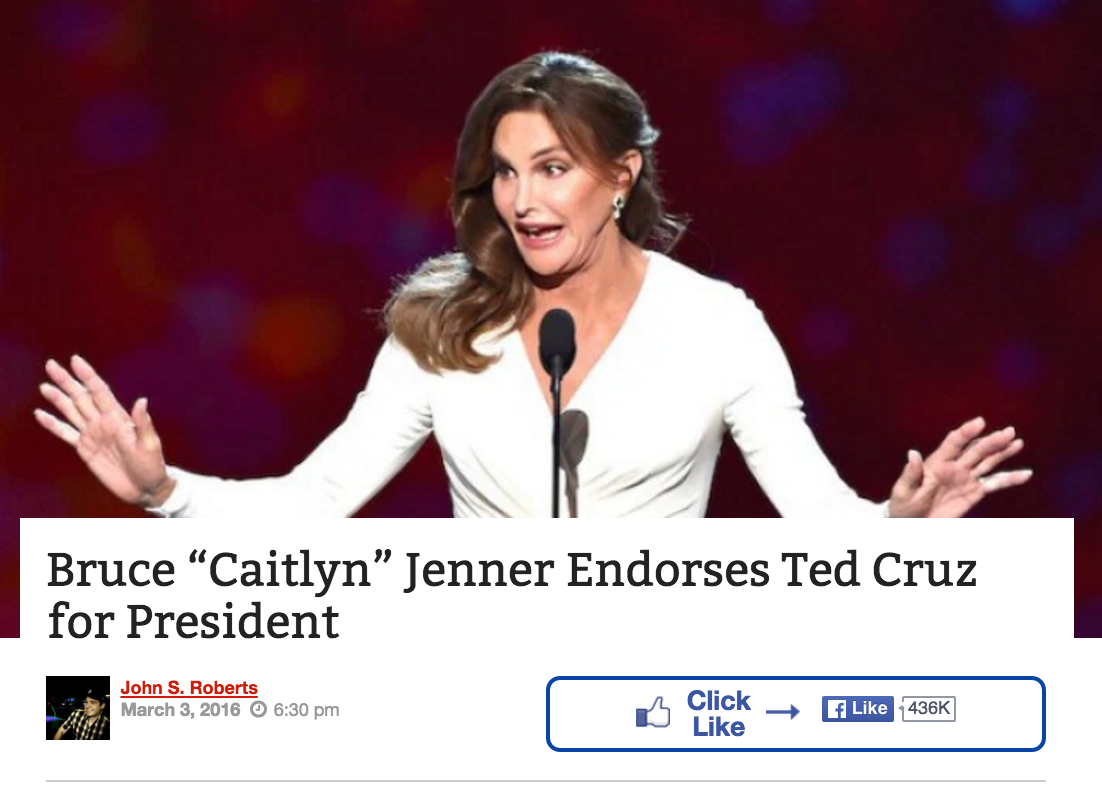 Bruce may not understand how chromosomes work, but he’s got a firm grasp on the constitution and what makes America flow.

I’m sure Cruz — if he were to acknowledge — would be thrilled to have Jenner on his side, as it tells hypocritical liberals that the GOP is not against gay people.

Aside from actually contradicting what Jenner said, these comments from YC demonstrate the sorry state of affairs that ensues when bigoted conservatives pretend they’re not really bigoted after all. From refusing to refer to Jenner by her name and refusing to recognize her gender, to advocating for the denial of marriage rights for same-sex couples, to conflating being trans with being gay, this is one giant mess.

Then there’s the website of conservative comedian Steven Crowder: Louder with Crowder. Crowder in the past has suggested that “transgenderism is a mental condition” and penned pearls of wisdom like, “Bruce/Caitlyn Jenner is a dude and he’ll never be a woman. Never. If that offends you, I don’t care.”) 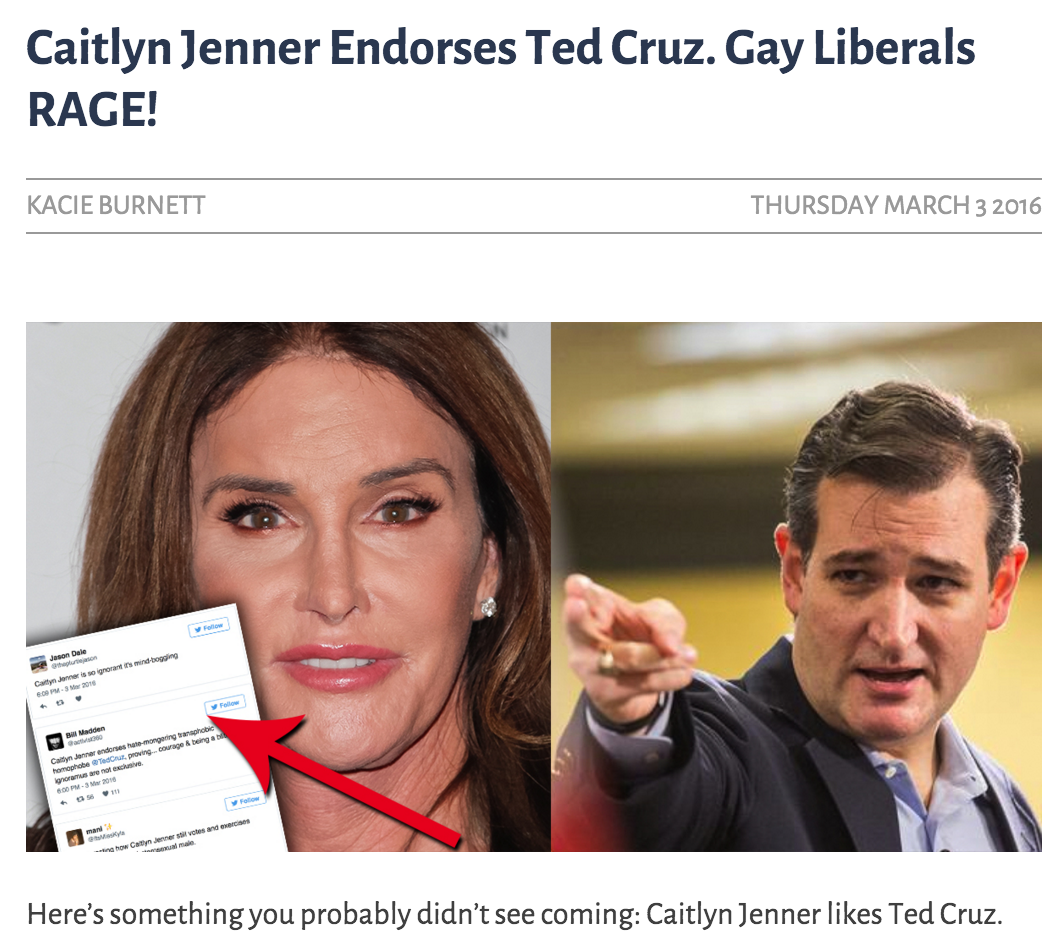 Here’s something you probably didn’t see coming: Caitlyn Jenner likes Ted Cruz. Not in the like like sort of way, because (s)he’s into chicks. But in the presidential sort of way.

After some bellyaching about the “liberal tolerance brigade” descending for a bout of “leftist cannibalism,” the site links to a few tweets criticizing Jenner (including one that says she “does not know what she is talking about.” That’s when the, um, conservative tolerance comes into focus:

And misgendering is just a preview of what Louder with Crowder has in store for Jenner, as the article quickly devolves from handwringing about insensitive liberals to… well, straight up trans-bashing.

Yes, just to be clear. The left is totally cool with a man pumping himself full of cancerous estrogen, Lorena Bobbit’ing his penis (or not, depending on the day), tossing on a dress and calling himself a girl. But believing in a Constitutionally limited government?

Well, they have to draw the line somewhere.

Her explanation for why conservatives are preferable to liberals is particularly curious.

“I get it. The Democrats are better when it comes to these types of social issues. I understand that.” So why support Republicans? “Number 1, if we don’t have a country, we don’t have trans issues. We need jobs. We need a vibrant economy. I want every trans person to have a job. With $19 trillion in debt and it keeps going up, we’re spending money we don’t have. Eventually, it’s going to end. And I don’t want to see that. Socialism did not build this country. Capitalism did. Free enterprise. The people built it. And they need to be given the opportunity to build it back up.”

That’s interesting in part because Jenner seems to have stolen my conservative mom’s spiel about spending almost word-for-word. Also, though, because the ideas of wanting “every trans person to have a job” and voting Republican are wildly, completely at odds with one another.

… the economy isn’t what’s keeping transgender people from finding employment — it’s anti-transgender discrimination. For example, the Washington, D.C. Office of Human Rights recently conducted a study that found that nearly half of various employers actually preferred a less-qualified candidate over someone they perceived to be transgender.

The 2011 National Transgender Discrimination Survey found that transgender people are four times as likely to be living in extreme poverty — with a household income of less than $10,000 — than the general population, with double the rate of unemployment. Nearly half of respondents (47 percent) reported knowing that they had been fired, not hired, or denied a promotion because of their identity, including 26 percent who lost a job for being transgender.

Anti-transgender discrimination that Republicans fight tooth and nail to protect, often under the guise of “religious freedom.” Republicans like — you guessed it — Ted Cruz, who seems to recoil at the very idea of treating LGBT Americans like equal members of society.

Cruz opposes The Equality Act, a law that would actually protect transgender people from discrimination in employment. …

… he introduced the State Marriage Defense Act last year, which would have allowed same-sex couples to become “unmarried” when they crossed the border into a state that didn’t recognize their marriages… Cruz nevertheless remains a primary sponsor and pledged supporter of the First Amendment Defense Act, which would enable discrimination against same-sex couples.

Cruz likewise opposes allowing transgender people to serve openly in the military. “How about having the military focusing on hunting down and killing the bad guys… instead of treating it as this crucible for social justice innovations?” he said in October. “We shouldn’t view the military as a cauldron for social experiments.”

Whether it’s serving in the armed forces or working in the civilian sector, transgender Americans can expect nothing from Ted Cruz. Nothing, that is, but continued attacks on their rights, coupled with scorn and derision.

This is, after all, the same Ted Cruz who spread lies about the Colorado Planned Parenthood shooter, Robert Lewis Dear, ludicrously describing him as “transgendered.”

“Well, it’s also been reported that he was registered as an independent and a woman and transgendered leftist activist, if that’s what he is.”

This is the same Ted Cruz who called efforts to support transgender kids in school “lunacy.” He believes sharing a bathroom with a transgender person is having that person “inflicted” on you. Somehow.

Still, Jenner maintains hope that Cruz can be reasoned with. And she thinks she’s the woman to do it.

Jenner reveals she met Cruz prior to her transition, more than a year ago, “and he was very nice.”

“Wouldn’t it be great, let’s say he goes on to be president,” she tells me in relating a conversation on the tour bus. “And I have all my girls on a trans issues board to advise him on making decisions when it comes to trans issues. Isn’t that a good idea?”

“You’re going to be Ted Cruz’s trans ambassador?” I respond.

“Yes, trans ambassador to the president of the United States, so we can say, ‘Ted, love what you’re doing but here’s what’s going on.’”

I wish things were as simple as that. But Jenner severely underestimates the evangelical prejudice against LGBT people if she really believes that pointing out the harm Cruz is causing would change his mind. People have been doing that for years to no avail.

Christians like Cruz not only don’t care, they believe the harm they inflict is the will of God. To conservatives, the opinions of transgender women matter even less than their rights — and Cruz has spent a good part of his career attacking those.

March 4, 2016
A Teacher Who Led Students Out of a Religious Assembly May Be Fired After Accusations of Racism
Next Post