A Teacher Who Led Students Out of a Religious Assembly May Be Fired After Accusations of Racism March 4, 2016 Hemant Mehta

Get this: At Paul Laurence Dunbar Middle School For Innovation in Lynchburg, Virginia, a white teacher interrupted a Black History Month assembly and told the kids to leave the auditorium with him!

A letter was sent home to all parents explaining the problem:

During the assembly, an employee interrupted the program by going to the microphone on the stage during the singing performance to express his offence with this portion of the program, and offered the students an opportunity to leave the auditorium with him.

It appears that the teacher, Jason Tyree, may lose his job over this, given the community reaction.

Even former Lynchburg Mayor Carl Hutcherson Jr. asked the school board to fire him: 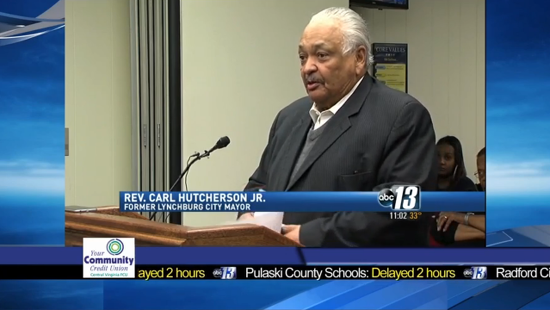 “To the community at large… we would ask that the Lynchburg city school board summarily dismiss this person who committed this grievance,” said Mr. Hutcherson Jr.

It all makes sense… until you realize that the adults in this situation have it all wrong.

Tyree wasn’t interrupting the program on account of racism.

He did it because the Liberty University Praise Group was singing Christian music, he understood that this was a violation of church/state separation, and he spoke up to let students know that they didn’t have to sit through this if they didn’t want to.

That’s the real story according to a number of students, including Delaney Taylor, who began a petition in Tyree’s defense:

… There was a choir group who did skits about black history, but what they did not let any of the students or parents know is that they would be singing about God. Mr.Tyree is a good teacher for doing something about it and going on stage announcing “If anyone is offended by this you may leave the auditorium to come with me in the gym” Meaning if this is against anyone’s religion you can leave to come with me in the gym.

It seems like the Lynchburg community is attacking a teacher who was doing everything right, after they did everything wrong by inviting a Christian Gospel choir to sing at a public school assembly.

(Just to point out the obvious, Liberty is the school founded by Jerry Falwell. And Mayor Hutcherson also doubles as a reverend. So you know the Christian Persecution sentiment runs deep in this community.)

If Taylor’s version of the story is accurate, Tyree shouldn’t be getting a pink slip. He should be getting an award.

But if she really wanted to make an impact here, the petition is just a start. I would urge her to contact FFRF, the ACLU, or Americans United. Every one of those groups would recognize that the district could be sued if they don’t rectify this situation immediately and promise to never again promote religion in a school program.

Get in touch with them, Delaney!

March 4, 2016
School Board Members in Chino Valley (CA) Vow to Keep Praying to Jesus at Meetings
Next Post