A Creationist Research Paper Was Published, Then Retracted, from Online Journal PLoS ONE March 4, 2016 Hemant Mehta

A Creationist Research Paper Was Published, Then Retracted, from Online Journal PLoS ONE

***Update***: The authors of this paper have announced that when they wrote “Creator,” they really meant “Nature.” Which is quite the mistranslation… No word yet on whether PLoS ONE will un-retract the paper given the other problems with it.

Somehow, a scientific paper was published on PLoS ONE — an “international, peer-reviewed, open-access, online publication” — that suggested our hands were created by a Higher Power.

The paper was all about how are hands (wait for it…) are really good at grasping things. Along the way, however, the authors said this evidence pointed to a divine “Creator.” Three different times. 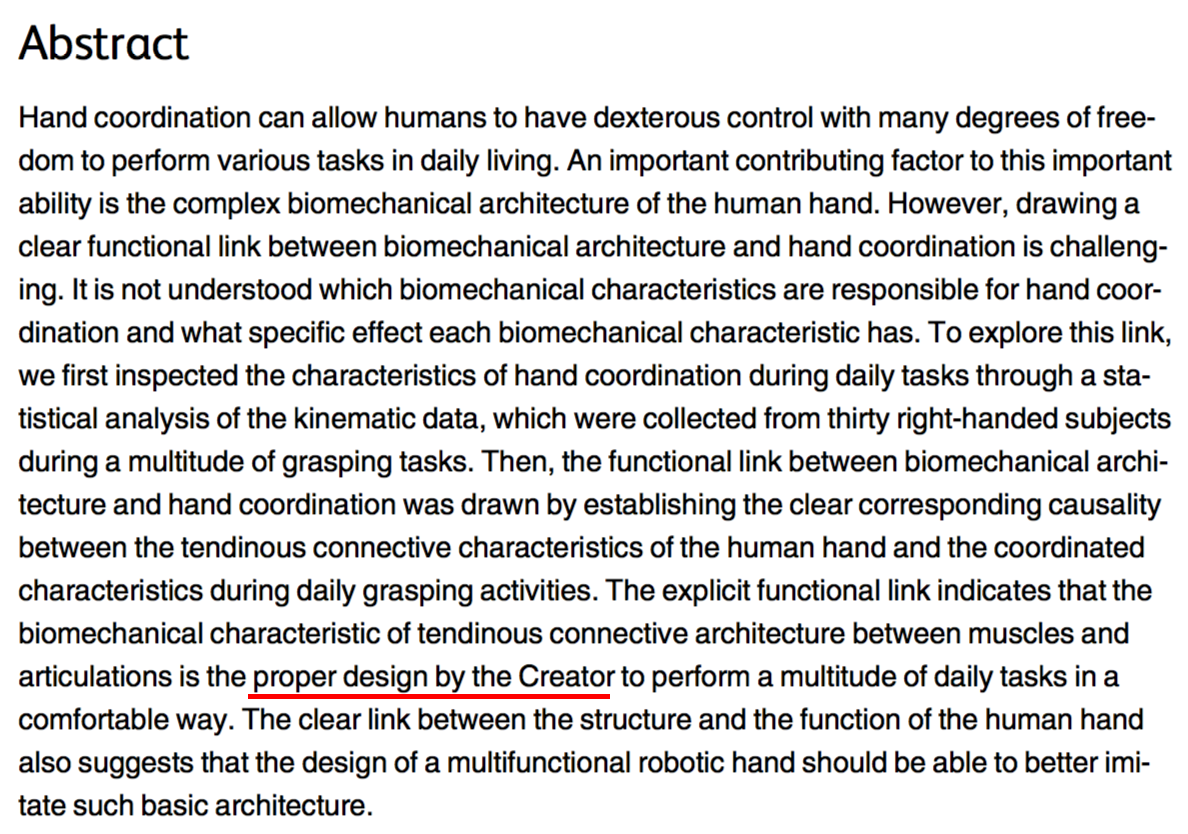 The explicit functional link indicates that the biomechanical characteristic of tendinous connective architecture between muscles and articulations is the proper design by the Creator to perform a multitude of daily tasks in a comfortable way.

Hand coordination should indicate the mystery of the Creator’s invention.

In conclusion, our study can improve the understanding of the human hand and confirm that the mechanical architecture is the proper design by the Creator for dexterous performance of numerous functions following the evolutionary remodeling of the ancestral hand for millions of years.

Jerry Coyne explained the website’s review process and how this paper, which obviously makes this unsubstantiated claim, made it through:

PLoS ONE has an unusual policy for a journal: it doesn’t gauge the importance of a paper before accepting it. Rather, the reviewers determine whether the paper’s methods support its results, and if they do, it’s published. That leads to some papers that, like this one, seem pretty trivial, but the journal has also published some excellent work. But there are too many editors, and not enough editorial oversight–as was clear in this case.

Coyne sent a message to the editors and soon received a reply that they were looking into this problem.

It wasn’t long before the paper was retracted:

The PLOS ONE editors have followed up on the concerns raised about this publication. We have completed an evaluation of the history of the submission and received advice from two experts in our editorial board. Our internal review and the advice we have received have confirmed the concerns about the article and revealed that the peer review process did not adequately evaluate several aspects of the work.

In light of the concerns identified, the PLOS ONE editors have decided to retract the article, the retraction is being processed and will be posted as soon as possible. We apologize for the errors and oversight leading to the publication of this paper.

Good on them. They made a mistake and they fixed it. (Keep in mind that the mention of “Creator” wasn’t the only problem with the paper.) But it is strange that the paper made it through the editorial process in the first place.

This is the sort of thing that Ken Ham and other Christian “scientists” will inevitably point to as an example of Christian Persecution. But the fact is that whatever evidence was presented in the paper had nothing to do with God’s existence. That’s just a random thought that was placed in there for no reason. It didn’t belong, and the paper’s retraction is absolutely not a slam on Christianity.

Even one of the paper’s authors admitted this was a mistake, claiming it was just a translation problem:

When contacted by Nature, [Cai-Hua] Xiong said that he was discussing the issues raised with his co-authors and would respond as soon as possible. He added, “Indeed, we are not native speakers of English, and entirely lost the connotations of some words such as ‘Creator’. I am so sorry for that.”

I’m honestly not sure what else they could have meant that would have been acceptable. You can’t stick the “Creator” — or anything supernatural — into a research paper and expect real scientists to take you seriously.

March 4, 2016
Russian Atheist Faces Jail Sentence for Saying "There is No God" During Online Chat
Next Post