Ted Cruz Urges Other Candidates to “Prayerfully Consider” Dropping Out of the Race March 3, 2016 Rachel Ford

After winning Oklahoma and Texas on Super Tuesday (he also went on to win Alaska), Republican Ted Cruz urged other candidates to “prayerfully consider” dropping out. 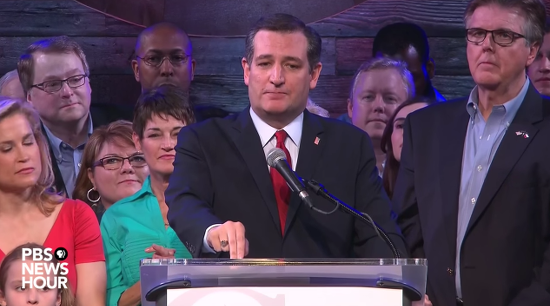 “For the candidates who have not yet won a state, who have not racked up significant delegates, I ask you to prayerfully consider uniting,” Cruz said, after congratulating Trump on his victories. “For those who have supported other candidates, we welcome you on our team standing as one.”

Nevermind the irony of one of the most proudly divisive figures in Washington calling for unity (when it benefits him). If Cruz’s rivals would but listen for the voice of God, they would surely hear it whispering, “Get out of Ted’s way.”

Which is probably good advice, considering what God did to Justice Antonin Scalia on Cruz’s behalf — and that was just to make a point to the Republican electorate.

Still, it’s kind of an odd request. I mean, one of the reasons the 2016 Clown Car had to be upgraded to a Tour Bus was because of that prankster God, telling half the party to run. (I mean, Ben Carson? Really God?) Now it seems God’s had His fun, and it’s time for everyone else to make room for Ted Cruz. So I guess the joke’s over.

On second thought, that actually sounds like a pretty good punchline to me…

March 3, 2016
Adam Savage Puts His Ass on the Line for Science
Next Post