For some reason, this meme has been spreading around social media: 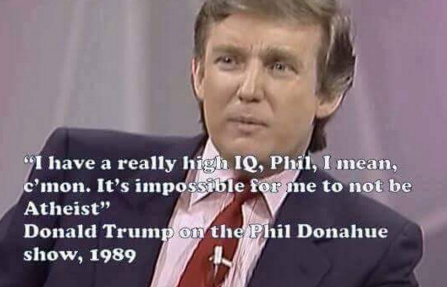 It features 1989-era Donald Trump on The Phil Donahue Show saying “I have a really high IQ, Phil. I mean, c’mon. It’s impossible for me to not be Atheist.”

Snopes has a definitive takedown of all of this, but here are the highlights:

There’s no evidence Trump appeared on Phil Donahue’s show in 1989. (He was a guest in 1987, but religion never came up.) More to the point, that photo comes from a 1988 appearance Trump made on the Oprah Winfrey Show. And he didn’t say the line during that appearance, either.

Which is good. Since it’s utterly stupid to equate a high IQ with atheism. Most studies that show a correlation go to great lengths to point out one doesn’t cause the other, and that there are many additional factors that people need to consider.

Also, I really don’t want this guy in the same camp as me. The Christians can have him. Let him hold the Bible up at every rally and let them deal with the consequences of his statements.

March 3, 2016
An Atheist Invocation in the Arizona House Led to a Massive Overreaction from Christian Politicians
Next Post